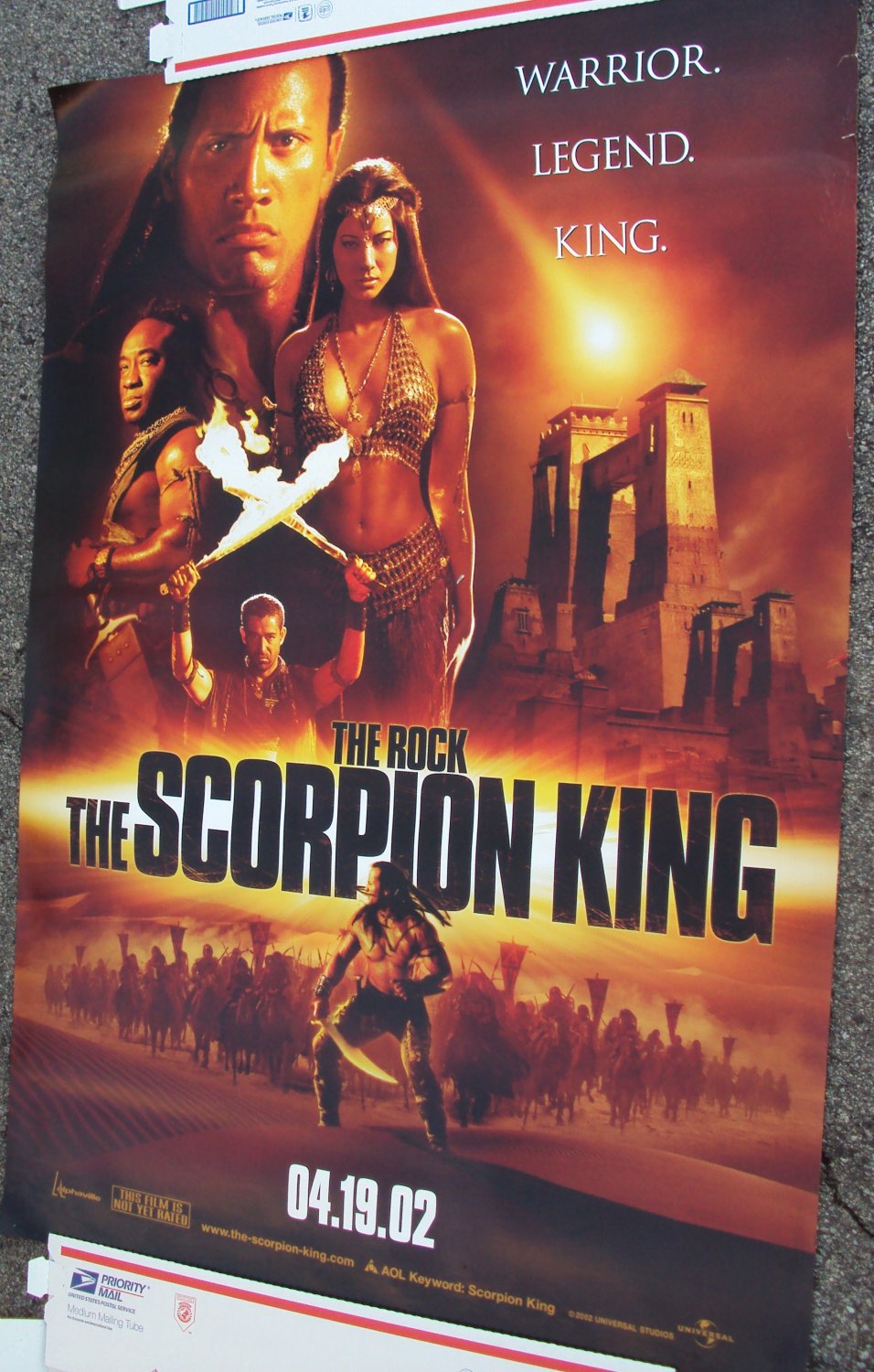 Tweet
This is a HUGE Bus Stop Panel POSTER measuring 48” x 68” it’s double sided, has tack marks and a sedwear from use, one side is glossy one is matte. This was to promote at bus stop light boxes the It was to promote the popular MUMMY franchise UNIVERSAL STUDIOS film. This one focues on the rock in the action adventure film from 2002,

A desert warrior rises up against the evil army that is destroying his homeland. He captures the enemy's key sorcerer, takes her deep into the desert and prepares for a final showdown.

In an ancient time, predating the pyramids, the evil king Memnon is using the psychic powers of his sorceress Cassandra to fortell his great victories. In a last ditch effort to stop Memnon from taking over the world, the leaders of the remaining free tribes hire the assassin Mathayus to kill the sorceress. But Mathayus ends up getting much more than he bargained for. Now with the help of the trickster Arpid, tribal leader Balthazar and an unexpected ally, it's up to Mathayus to fufill his destiny and become the great Scorpion King.

These size posters were NOT readily available to the general public. They are the harder to find size. Postage is a little higher because of size! Great if you loved these Egyptian Action films!

MORE INFO ON THE ROCK: Dwayne Douglas Johnson was born in Hayward, California on May 2nd 1972 to Rocky Johnson and Ata Johnson. While growing up, Dwayne traveled around a lot with his parents and watched his father perform in the ring. During his high school years, Dwayne began playing football and he soon received a full scholarship from the University of Miami where he had tremendous success as a football player. In 1995, Dwayne suffered a back injury which cost him a place in the NFL. He then signed a 3 year deal with the Canadian League but left after a year to pursue a career in wrestling. He made his wrestling debut in the USWA under the name Flex Kavanah where he won the tag team championship with Brett Sawyer. In 1996, Dwayne joined the WWE and became Rocky Maivia where he joined a group known as "The Nation of Domination" and turned heel. Rocky eventually took over leadership of the "Nation" and began taking the persona of The Rock. After the "Nation" split, The Rock joined another elite group of wrestlers known as the "Corporation" and began a memorable feud with Steve Austin. Soon the Rock was kicked out of the "Corporation". He turned face and became known as "The Peoples Champion". In 2000, the Rock took time off from WWE to film his appearance in The Mummy Returns (2001). He returned in 2001 during the WCW/ECW invasion where he joined a team of WWE wrestlers at The Scorpion King (2002), a prequel to The Mummy Returns (2001). He is divorced from his first wife Dany Garcia (Garcia). They have a daughter together named Simone Alexandra, born in 2001.
... [Full Description]