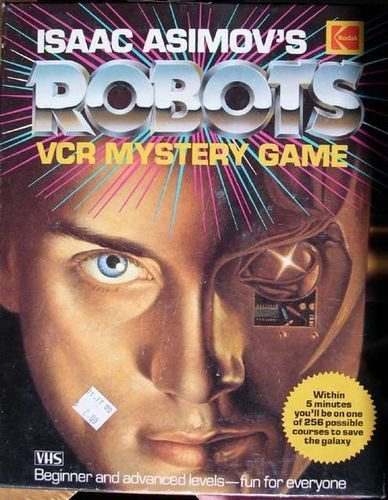 Info from the back of the box:
Intrigue:
Elijah Bailey, the greatest detective of the 23rd century, is faced with his toughest assignment ever... and he needs your help.

For the first time in 100 years, someone has attempted a murder. With the advent of the Robot, crime has virtually disappeared. Yet a murder attempt has been made, and it may happen again. Who did it? Was it an Earthling, a Spacer, or the unthinkable... a Robot?

Only you can put together the pieces and uncover the identity of the perpetrator. You'll have to move quickly though, and catch the criminal before another attempt is made.

For Fun:
Robots is easy to play. Just watch the video tape, and uncover each of the six photo clue cards as the story unfolds. You can play Robots hundreds of times and may never play exactly the same game twice.

After the tape is over, review the clues and make your accusations. If you're right, the perpetrator goes to jail. If not... you've convicted an innocent person and Earth will be destroyed.

This is the only video game based on Isaac Asimov's Robot novels. It features fast action, special effects, and a cast of some of the most ruthless characters you'll ever meet.

"Robots adds a new dimension to my novels- it's great fun." -Isaac Asimov