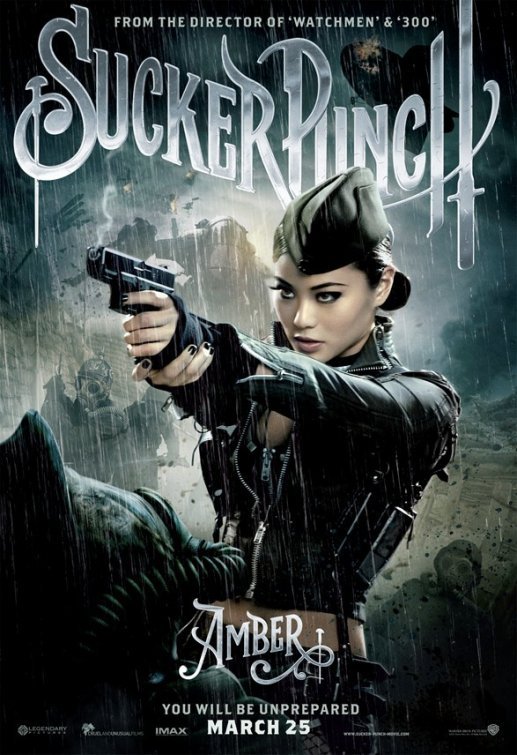 Tweet
Zack Snyder's SUCKER PUNCH Original Movie Poster * Jamie Chung * 2' x 3' Rare 2011 NEW. Original Poster Large wall size : measures 24" inches wide by 36" inches high. Large Color Poster for the March 25th 2011 selected theater release of * Sucker Punch *. Sucker Punch is an upcoming American action-fantasy film written by Steve Shibuya and Zack Snyder ( The 300 , The Watchman , Dawn of the Dead ) , and directed by Snyder. Sucker Punch features an ensemble female cast that includes Emily Browning, Abbie Cornish, Jena Malone, Vanessa Hudgens and Jamie Chung. The film follows a young girl in the 1950s about to be lobotomized as she attempts to escape an asylum with her inmate friends.
Development began in March 2007. The script, which was penned by Snyder and Shibuya, was finalized in five years and was actually planned to be made first before Watchmen. For Sucker Punch, Snyder gathered most of the Vancouver-based production team who worked on Watchmen. Pre-production took place in Los Angeles in June 2009, then moved to Vancouver in July. Principal photography began in September 2009 and concluded in January 2010; filming took place in Vancouver. Sucker Punch is scheduled to be released in both conventional and IMAX theatres on March 25, 2011. Snyder has described the film as "Alice in Wonderland with machine guns", including dragons, B-25 bombers and brothels. Snyder's wife and producing partner Deborah Snyder concludes, "in the end, it's about this girl's survival and what she needs to do to be able to cope." This New Original Poster is large size wall size and is printed on thick heavy chrome-coat advertising poster stock paper and printed in Beautiful , Brilliant Razor-sharp 6 color production. This original poster has been gently pre-folded 2 ways from the factory , and does have the small authentic " pea-size " punch-mark on the bottom corner of the poster . This is the Rare Original Official Advance Release Poster for the March 25th 2011 release of * Sucker Punch * printed in Limited Edition. Authentic Sucker Punch Collectable ~ ready for framing , or just simply hang as is. Great for a Dorm Room , Den or Office. Will be carefully rolled and shipped in a heavy duty tube and shipped Priority Mail with Delivery Confirmation / Tracking. This Original Poster is in Brand New Condition. Please email with any questions before purchasing if you are unsure about something. We ONLY accept Money Orders , Cashiers Checks or U.S. Cash as payment ( we do NOT accept personal checks or online payment at all ). Please email about local pick-up , we are located in NYC in Times Square. All International Customers MUST email us before purchasing this item.
... [Full Description]

Other Products from daring-niche (View All)