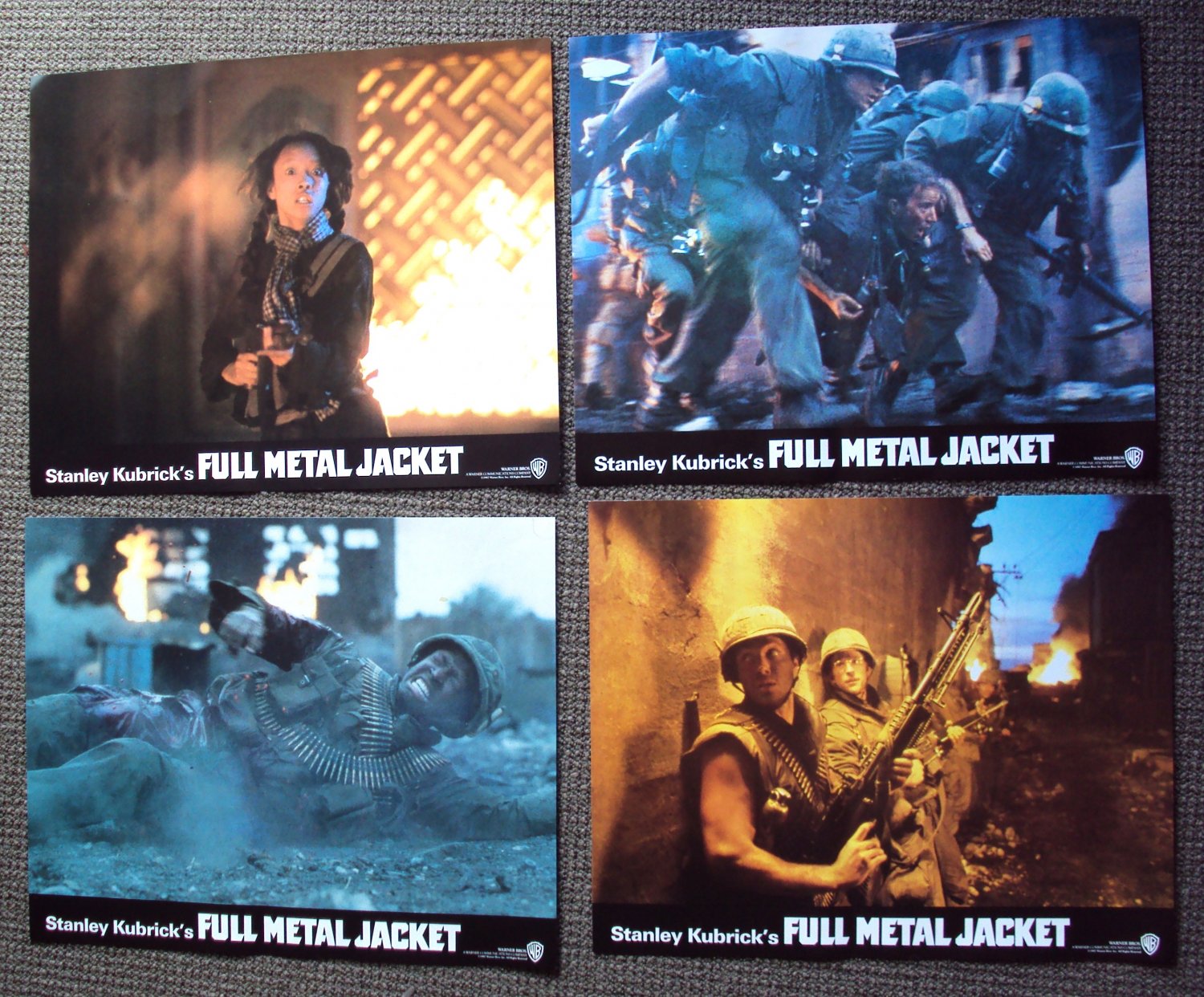 Tweet
This is an ORIGINAL 4 Lobby Card Set measuring 16" x 20" they are HUGE like Road Show lobbies, featuring great color images for the 1987 War Motion picture,

A pragmatic U.S. Marine observes the dehumanizing effects the Vietnam War has on his fellow Marine recruits from their brutal basic training to the bloody street fighting set in 1968 Hue, Vietnam. A two-segment look at the effect of the military mindset and war itself on Vietnam era Marines. The first half follows a group of recruits in basic training under the command of the punishing Sgt. Hartman. The second half shows one of those recruits, Joker, covering the war as a correspondent for Stars and Stripes, focusing on the Tet offensive.


Lt. Cleves
Lobby Cards have some edge and surface wear, beacause of size. a couple have corner bends. ! Nice for fans of Kubrick or war films!

MORE INFO ON STANLEY KUBRICK: Stanley Kubrick was born in New York, and was considered intelligent despite poor grades at school. Hoping that a change of scenery would produce better academic performance, Kubrick's father Jack (a physician) sent him in 1940 to Pasadena, California, to stay with his uncle Martin Perveler. Returning to the Bronx in 1941 for his last year of grammar school, there seemed to be little change in his attitude or his results. Hoping to find something to interest his son, Jack introduced Stanley to chess, with the desired result. Kubrick took to the game passionately, and quickly became a skilled player. Chess would become an important device for Kubrick in later years, often as a tool for dealing with recalcitrant actors, but also as an artistic motif in his films.

Jack Kubrick's decision to give his son a camera for his thirteenth birthday would be an even wiser move: Kubrick became an avid photographer, and would often make trips around New York taking photographs which he would develop in a friend's darkroom. After selling an unsolicited photograph to Look Magazine, Kubrick began to associate with their staff photographers, and at the age of seventeen was offered a job as an apprentice photographer.

In the next few years, Kubrick had regular assignments for "Look", and would become a voracious movie-goer. Together with friend Alexander Singer, Kubrick planned a move into film, and in 1950 sank his savings into making the documentary Day of the Fight (1951). This was followed by several short commissioned documentaries (Flying Padre: An RKO-Pathe Screenliner (1951), and _Seafarers, The (1953)_), but by attracting investors and hustling chess games in Central Park, Kubrick was able to make Fear and Desire (1953) in California.

Filming this movie was not a happy experience; Kubrick's marriage to high school sweetheart Toba Metz did not survive the shooting. Despite mixed reviews for the film itself, Kubrick received good notices for his obvious directorial talents. Kubrick's next two films Killer's Kiss (1955) and The Killing (1956) brought him to the attention of Hollywood, and in 1957 he directed Kirk Douglas in Paths of Glory (1957). Douglas later called upon Kubrick to take over the production of Spartacus (1960), by some accounts hoping that Kubrick would be daunted by the scale of the project and would thus be accommodating. This was not the case, however: Kubrick took charge of the project, imposing his ideas and standards on the film. Many crew members were upset by his style: cinematographer Russell Metty complained to producers that Kubrick was taking over his job. Kubrick's response was to tell him to sit there and do nothing. Metty complied, and ironically was awarded the Academy Award for his cinematography.

Kubrick's next project was to direct Marlon Brando in One-Eyed Jacks (1961), but negotiations broke down and Brando himself ended up directing the film himself. Disenchanted with Hollywood and after another failed marriage, Kubrick moved permanently to England, from where he would make all of his subsequent films. Despite having obtained a pilot's license, Kubrick was rumored to be afraid of flying.

Kubrick's first UK film was Lolita (1962), which was carefully constructed and guided so as to not offend the censorship boards which at the time had the power to severely damage the commercial success of a film. Dr. Strangelove or: How I Learned to Stop Worrying and Love the Bomb (1964) was a big risk for Kubrick; before this, "nuclear" was not considered a subject for comedy. Originally written as a drama, Kubrick decided that too many of the ideas he had written were just too funny to be taken seriously. The film's critical and commercial success allowed Kubrick the financial and artistic freedom to work on any project he desired. Around this time, Kubrick's focus diversified and he would always have several projects in various stages of development: "Blue Moon" (a story about Hollywood's first pornographic feature film), "Napoleon" (an epic historical biography, abandoned after studio losses on similar projects), "Wartime Lies" (based on the novel by Louis Begley), and "Rhapsody" (a psycho-sexual thriller).

The next film he completed was a collaboration with sci-fi author Arthur C. Clarke. 2001: A Space Odyssey (1968) is hailed by many as the best ever made; an instant cult favorite, it has set the standard and tone for many science fiction films that followed. Kubrick followed this with A Clockwork Orange (1971), which rivaled Lolita (1962) for the controversy it generated - this time not only for its portrayal of sex, but also of violence. Barry Lyndon (1975) would prove a turning point in both his professional and private lives. His unrelenting demands of commitment and perfection of cast and crew had by now become legendary. Actors would be required to perform dozens of takes with no breaks. Filming a story in Ireland involving military, Kubrick received reports that the IRA had declared him a possible target. Production was promptly moved out of the country, and Kubrick's desire for privacy and security resulted in him being considered a recluse ever since.

Having turned down directing a sequel to The Exorcist (1973), Kubrick made his own horror film: The Shining (1980). Again, rumors circulated of demands made upon actors and crew. Stephen King (whose novel the film was based upon) reportedly didn't like Kubrick's adaptation (indeed, he would later write his own screenplay which was filmed as "The Shining" (1997).)

Kubrick's subsequent work has been well spaced: it was seven years before Full Metal Jacket (1987) was released. By this time, Kubrick was married with children and had extensively remodeled his house. Seen by one critic as the dark side to the humanist story of Platoon (1986), Full Metal Jacket (1987) continued Kubrick's legacy of solid critical acclaim, and profit at the box office.

In the 1990s, Kubrick began an on-again/off-again collaboration with Brian Aldiss on a new science fiction film called "Artificial Intelligence (AI)", but progress was very slow, and was backgrounded until special effects technology was up to the standard the Kubrick wanted.

Kubrick returned to his in-development projects, but encountered a number of problems: "Napoleon" was completely dead, and "Wartime Lies" (now called "The Aryan Papers") was abandoned when Steven Spielberg announced he would direct Schindler's List (1993), which covered much of the same material.

While pre-production work on "AI" crawled along, Kubrick combined "Rhapsody" and "Blue Movie" and officially announced his next project as Eyes Wide Shut (1999), starring the then-married Tom Cruise and Nicole Kidman. After two years of production under unprecedented security and privacy, the film was released to a typically polarized critical and public reception; Kubrick claimed it was his best film to date.
... [Full Description]