Concordance of french words of the Bible 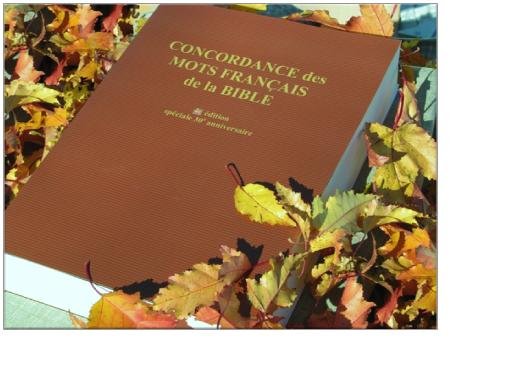 A concordance enables you to locate a biblical passage which we know the reference but we remember at least one significant word . Unlike a simple index , the correlation gives some of the background accompanying the word to clarify the meaning . For more information see pages Presentation of Concordance ( PDF file).

This agreement , containing all the words of the Bible, except accessory words ( . Articles, prepositions, etc. ) is based on the text of Louis Segond revised in 1979 , called " New International Version " and is valid 100% with the 1910 text and the textual variants from 1975 to 1978.

French word for each version of the Bible New International Version :


lemma ( dictionary form ) and its frequency in the biblical text ;
the form in the text and its frequency in the Bible (AT or NT ) ;
biblical reference ;
part of the verse (context)
the "&" symbol replacing the word in the context in order to increase the number of significant words from the context ;
Cochrane number that refers to the Hebrew word (AT) and Greek (NT) where the original French word .

Cochrane numbers are version 2 revised, corrected and enlarged in the 20th century Strong Numbers published for the first time in the 17th century .
... [Full Description]

Other Products from flaban (View All)