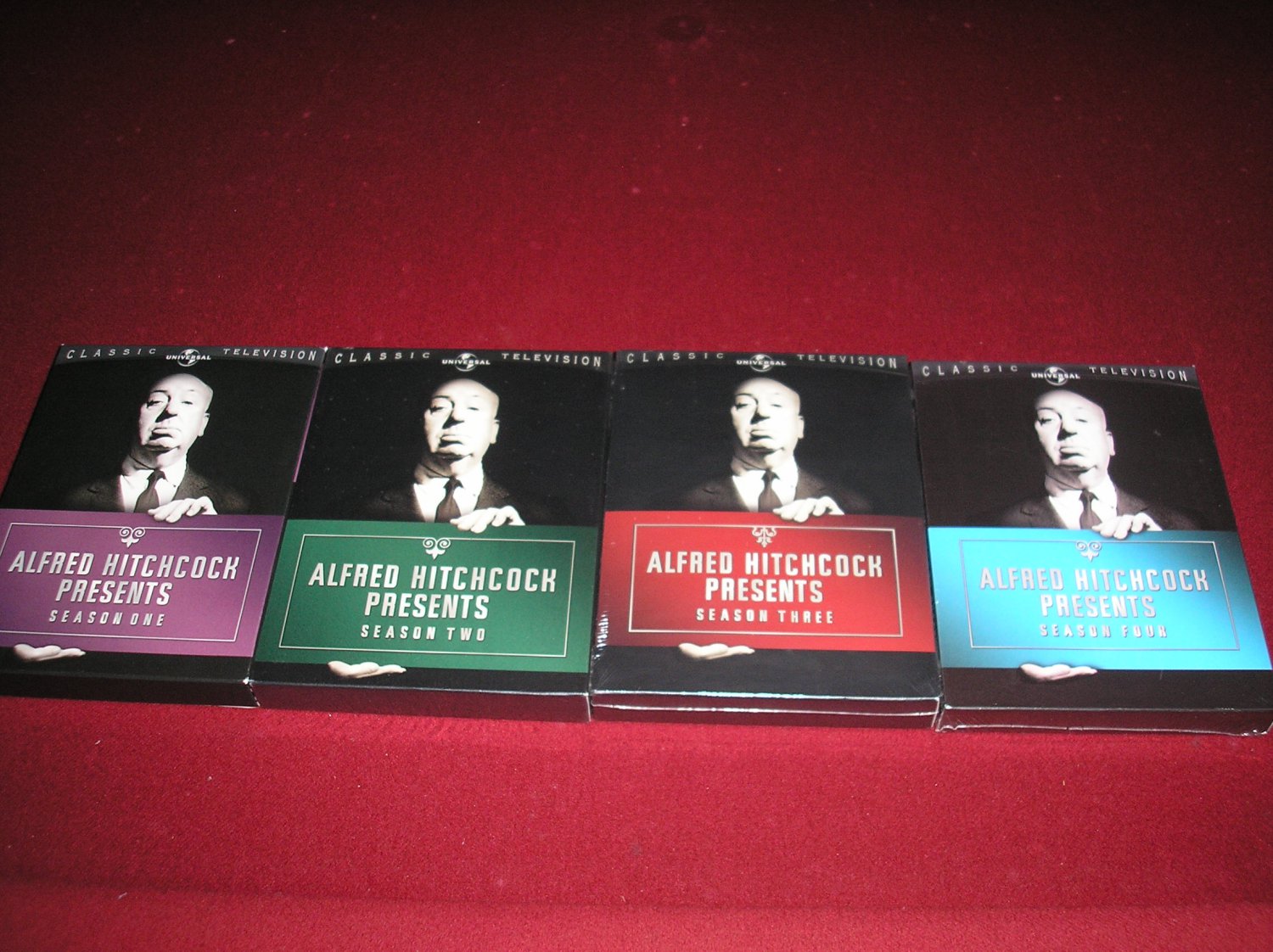 Tweet
This is a set of 4 seasons of Alfred Hitchcock Presents - Season One; Season Two; Season Three and Season Four! Season One was opened and viewed once, the remaining 3 Seasons are BRAND NEW, still in the factory shrinkwrap!

When it premiered on CBS on October 2, 1955, Alfred Hitchcock Presents was an instant hit destined for long-term popularity. The series' original half-hour anthology format provided a perfect showcase for stories of mystery, suspense, and the macabre that reflected Hitchcock's established persona. Every Sunday at 9:30 p.m., the series began with the familiar theme of Gounod's "Funeral March of a Marionette" (which would thereafter be inextricably linked with Hitchcock), and as Hitchcock's trademark profile sketch was overshadowed by the familiar silhouette of Hitchcock himself, the weekly "play" opened and closed with the series' most popular feature: As a good-natured host whose inimitable presence made him a global celebrity, Hitchcock delivered droll, dryly sardonic introductions and epilogues to each week's episode, flawlessly written by James Allardyce and frequently taking polite pot-shots at CBS sponsors, or skirting around broadcast standards (which demanded that no crime could go unpunished) by humorously explaining how the show's killers and criminals were always brought to justice... though always with a nod and a wink to the viewer.

Join the legendary "Master of Suspense", Alfred Hitchcock, in all 39 original episodes of the first season of Alfred Hitchcock Presents, the Emmy Award-winning murder-mystery series that, in the words of Hitchcock himself, "brought murder back into the home - where it belongs." This spectacular collection includes exclusive never-before-available bonus features, including in-depth interviews with Alfred Hitchcock's daughter, Pat, and associate producer Norman Lloyd. Join stellar guest stars including Cloris Leachman, Charles Bronson, Claude Rains, Lorne Greene, Joanne Woodward, Vera Miles and more in over 16 hours of the most captivating, intriguing, suspenseful television ever aired.

"Good evening..."
With dramatic flourish, Master of Suspense Alfred Hitchcock used these simple words to introduce all of his 39 timeless episodes of horror, mystery and intrigue in Alfred Hitchcock Presents: Season Two, now available in a 5-disc collection. Not only loved by millions of TV viewers around the world, this legendary season also received three Emmy awards as well as a Golden Globe for Television Achievement. Loaded with twists, turns and things that go "bump" in the noght, these classic half-hour tales of menace and mayhem feature such iconic stars as Jessica Tandy, Hume Cronyn, Rip Torn, Vic Morrow, and many more. It's time to tune in once more to the master storyteller as he delights viewers with some of the most deliciously wicked and chilling television ever aired!

The Master of Suspense returns with all 39 Primetime Emmy Award-Nominated Season Three episodes of Alfred Hitchcock Presents! Filled with tales of murder, madness, intrigue and suspense, this unforgettable series was renowned for its riveting storytelling and compelling characters. It's no mystery why it featured some of television's most illustrious guest stars including William Shatner, Jessica Tandy, Jack Klugman, E.G. Marshall, Vincent Price, Peter Lorre, Joseph Cotten, Fay Wray, Hume Cronyn and many more! Moninated for an astounding 15 Emmy's, this beloved series is an essential for every DVD collection!

Legendary, award-winning and suspenseful, Alfred Hitchcock Presents set the gold standard for all TV mystery series to some and has remained an indelible part of popular culture. And now, the complete fourth season - all 36 edisodes - is available on DVD for fans to enjoy again and again. Join guest stars Steve McQueen (Bullitt), Bette Davis (All About Eve), Claude Rains (Casablanca), Cloris Leachman (Young Frankenstein), Roger Moore (The Spy Who Loved Me), Walter Matthau (The Odd Couple), Brian Keith (Family Affair), Elizabeth Montgomery (Bewitched), Art Carney (Harry and Tonto), Mary Astor (The Maltese Falcon), Barbara Bel Geddes (Dallas), Denholm Eliot (Raiders of the Lost Ark), Dick York (Bewitched), Leslie Nielson (Airplane!) and more as they act in stories of intrigue and murder...all under the watchful eye of the Master of Suspense himself. Nominated for 15 Primetime Emmy Awards, and winner of 3 Primetime Emmy Awards plus the Golden Globe for Television Achievement, there's no question why this show remains one of the most beloved classic series ever made.
SPECIAL FEATURE: FASTEN YOUR SEATBELT: THE THRILLING ART OF ALFRED HITCHCOCK
... [Full Description]