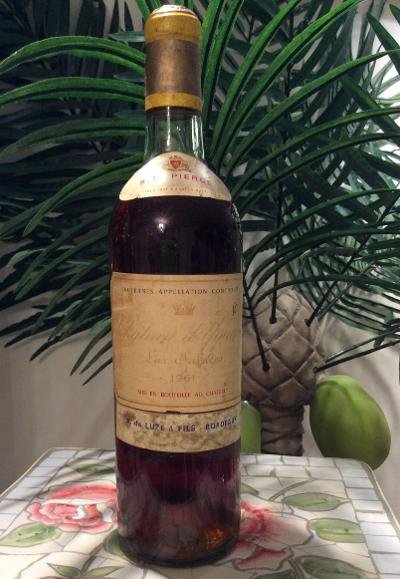 This is part of a large wine collection I have been asked to sell for a relative. The wine has been stored horizontally in a dark climate controlled wine cellar for many years. No visible signs of leakage or cork damage.

Château d’Yquem had been in the hands of Lur Saluces family from 1785 to 1997. After several years of legal controversies, caused by disagreements within Lur Saluces family, mode giant LVMH (Louis Vutton, Moët Hennesy and Château Cheval Blanc) gained majority of shares in d’Yquem in 1997, when Count Alexandre de Lur Saluces sold his shares to LVMH. He did however continue as manager of d’Yquem, according to agreement with the new owner. This changed radically in May 2004, when he retired and was replaced him with Pierre Lurton, already manager at Cheval Blanc. The latest vintages of d'Yquem conform very convincing, that Pierre Lurton has greatly succeeded to maintain d'Yquem's fantastic quality.

This property is beautifully placed at hilltop in Sauternes commune, with its 103 ha big vineyard (clay and gravel on the surface and lime stones in the subsoil), planted with 80% Semillon and 20% Sauvignon Blanc. The average age of vines is 27 years and the yield does not exceed 10 hl/ha. The wine matures for 3.5 years in new barrels. Neither chaptalisation nor other techniques, which increase sugar content in grape must, are allowed. D’Yquem is one of the very few properties in the district, to use both semi-botrytised and fully botrytised grapes for the wine, in order to have enough acidity to balance sweetness.

D’Yquem is made without any compromises and consideration whatsoever about production costs - pickers are on constant alert for 1.5-2 months, and do many picking rounds in the vineyard. Often, the amount of these rounds is double or triple, compared to how many rounds other classified properties perform in the district. Here, we have the king of Sauternes & Barsac, world’s most expensive and most demanded dessert wine, which has an enormous keeping potential (50 years+). At its best, this wine possesses a purely exceptional botrytis, enormous concentration and such a nuance-richness, which makes you speechless.
... [Full Description]