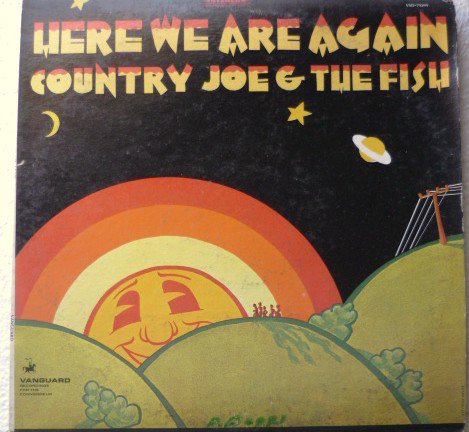 Condition: Very good to very good + condition, has been listened to, name on label. Cover is in acceptable condition with edge and record rim wear.

"By the time of Country Joe & the Fish's fourth album, the group seemed to consist of only Joe McDonald and Barry Melton, who had started the band in the beginning. Here We Are Again continued CJ&F's move toward pop (especially on "Here I Go Again") and bluesy rock, and away from their folk and jug band beginnings. But there were no songs to match some of the idiosyncratic winners on earlier albums, and the anonymous studio backing lacked the spontaneity of the original Fish. Though there would be one more new album in 1970 (C J Fish), Country Joe & the Fish no longer existed as anything other than a name; a fact that would be underlined in December 1969 by the simultaneous releases of Greatest Hits and McDonald's solo album, Thinking of Woody Guthrie." ~ William Ruhlmann, All Music Guide