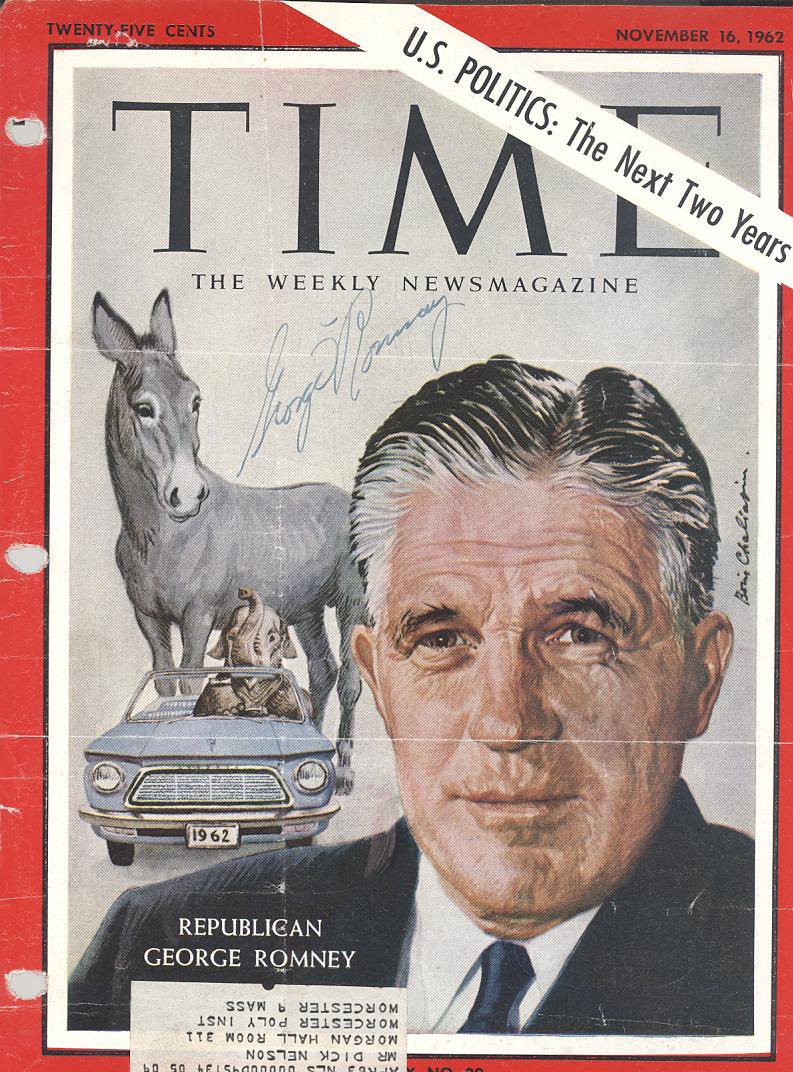 Tweet
ATTENTION: STARTING MAY 1, I WILL BE POSTING AN AUTOGRAPH OF THE MONTH AT A VERY LOW BARGAIN PRICE. BE THE FIRST TO SNAG A BARGAIN.

Many of my items were signed in person. This item was purchased from a highly respected autograph collector and good friend of mine.

George Wilcken Romney (July 8, 1907 – July 26, 1995) was an American businessman and Republican Party politician. He was chairman and president of American Motors Corporation from 1954 to 1962, the 43rd Governor of Michigan from 1963 to 1969, and the United States Secretary of Housing and Urban Development from 1969 to 1973. He is the father of former Governor of Massachusetts Mitt Romney and the husband of former Michigan U.S. Senate candidate Lenore Romney.
Romney was born to American parents living in the Mormon colonies in Mexico; events during the Mexican Revolution forced his family to flee back to the United States when he was a child. The family lived in several states and ended up in Salt Lake City, Utah, where they struggled during the Great Depression. Romney worked in a number of jobs, served as a Mormon missionary in England and Scotland, and attended two universities in the U.S. but did not graduate from either. In 1939 he moved to Detroit and joined the American Automobile Manufacturers Association, where he served as the chief spokesman for the automobile industry during World War II and headed a cooperative arrangement in which companies could share production improvements. He joined Nash-Kelvinator in 1948, and became the chief executive of its successor, American Motors Corporation, in 1954. There he turned around the struggling firm by focusing all efforts on the compact Rambler car. Romney mocked the products of the "Big Three" automakers as "gas-guzzling dinosaurs" and became one of the first high-profile, media-savvy business executives. Devoutly religious, Romney presided over the Detroit Stake of The Church of Jesus Christ of Latter-day Saints.
Romney entered politics by participating in a state constitutional convention to rewrite the Michigan Constitution during 1961–1962. He was elected Governor of Michigan in 1962 and was re-elected by increasingly large margins in 1964 and 1966. Romney worked to overhaul the state's financial and revenue structure, culminating in Michigan's first state income tax, and greatly expanded the size of state government. Romney was a strong supporter of the American Civil Rights Movement. He briefly represented moderate Republicans against conservative Republican Barry Goldwater during the 1964 U.S. presidential election. He requested the intervention of federal troops during the 1967 Detroit riot.
Romney was a candidate for the Republican nomination for President of the United States in 1968. While initially a front-runner, he proved an ineffective campaigner, and fell behind Richard Nixon in polls. Following a mid-1967 remark that his earlier support for the Vietnam War had been due to a "brainwashing" by U.S. military and diplomatic officials in Vietnam, his campaign faltered even more, and he withdrew from the contest in early 1968. Once elected president, Nixon appointed Romney Secretary of Housing and Urban Development. Romney's ambitious plans for housing production increases for the poor, and for open housing to desegregate suburbs, were modestly successful but often thwarted by Nixon. Romney left the administration at the start of Nixon's second term in 1973. Returning to private life, Romney advocated volunteerism and public service, and served as a regional representative of the Twelve within his church.

Lifetime money back guarantee. Certified Authentic hand signed by George W. Romney.All my items are shipped promptly, safely packed, insured with tracking numbers. I have a lifetime of historic, political, sports, and entertainment autographs. Some of which are now in museums, and in the hands of the most serious collectors. Now that I am retiring I will be selling many of the items I have collected over the last 50 years. I am a proud member of the Universal Autograph Collectors Club, Inc. Stay tuned to my site to find amazing items and great savings. Thanks for looking.
... [Full Description]

Other Products from philadelphiavintagesound (View All)