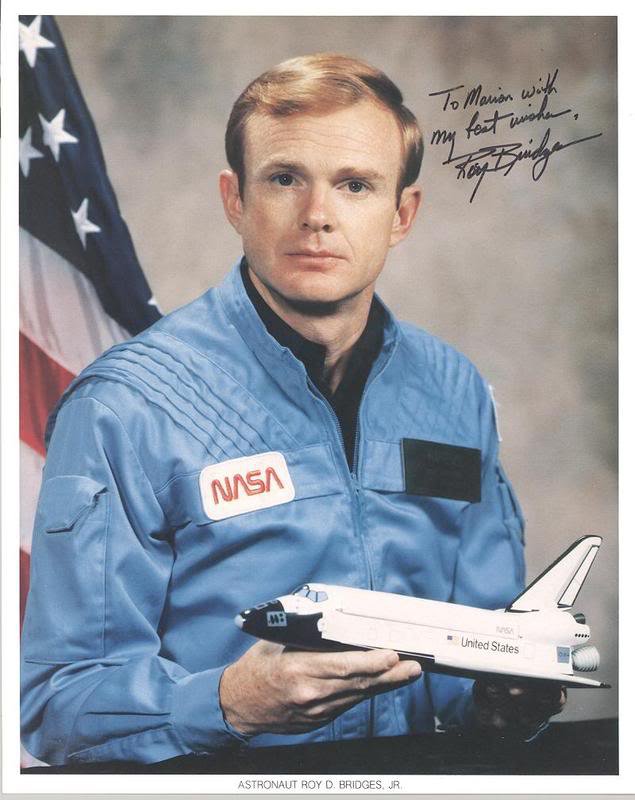 Tweet
ATTENTION: STARTING MAY 1, I WILL BE POSTING AN AUTOGRAPH OF THE MONTH AT A VERY LOW BARGAIN PRICE. BE THE FIRST TO SNAG A BARGAIN.

Many of my items were signed in person. This item was purchased from a highly respected autograph collector and good friend of mine.

Lifetime money back guarantee. Certified Authentic hand signed by Roy Bridges NASA Astrounaut.All my items are shipped promptly, safely packed, insured with tracking numbers. I have a lifetime of historic, political, sports, and entertainment autographs. Some of which are now in museums, and in the hands of the most serious collectors. I am a proud member of the Universal Autograph Collectors Club, Inc. Now that I am retiring I will be selling many of the items I have collected over the last 50 years. Stay tuned to my site to find amazing items and great savings. Thanks for looking.

As director, Bridges was responsible for managing NASA's only site for processing and launch of the Space Shuttle vehicle; processing the payloads flown on both the Shuttle and expendable launch vehicles; and overseeing expendable vehicle launches carrying NASA payloads. He managed a team of about 2,000 NASA civil servants and about 14,000 contractors.

Bridges is a retired U.S. Air Force Major General who served as the director of requirements, Headquarters Air Force Materiel Command, Wright-Patterson Air Force Base, Ohio, from June 1993 until his retirement July 1, 1996. In that position he served as the command focal point for product management policy, processes and resources.

Bridges graduated from Gainesville High School, Georgia, in 1961. He was active in the Boy Scouts of America where he achieved its second highest rank, Life Scout. He is a distinguished graduate of the United States Air Force Academy, Colorado Springs, Colorado, earning a bachelor's degree in engineering science in 1965. He received a master of science degree in astronautics from Purdue University, Indiana, in 1966.

Other Products from philadelphiavintagesound (View All)