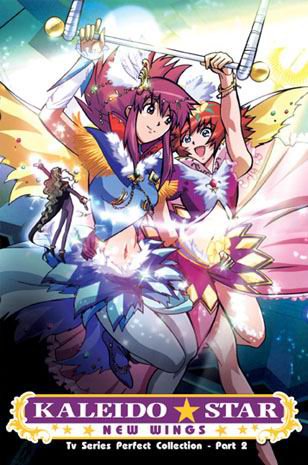 Although she's something of a klutz and has never studied ballet or trapeze, 16-year-old Sora Naegino comes to America from Japan to try out for the Cirque du Soleil-like Kaleido Stage. A typically spunky anime heroine who's always vowing to try her best, Sora wins a place in the cast in a last-minute audition. Her unconventional debut earns her the resentment of the other new girls, but her cheerful determination soon wins them over--except for Layla, the icy star of the show. Back in her room, Sora is counseled by the phantom-like Spirit of the Stage, who can only be seen by those destined to become performers. This acrobatic Cinderella story plays like a mixture of Sakura Wars and 42nd Street: Sora initially gives less-than-sensational performances in minor parts, but by the end of the series, she'll take Layla's place.
... [Full Description]