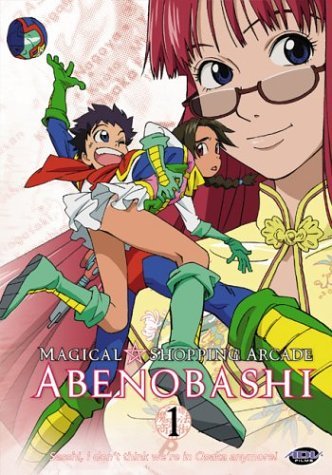 The new series from Studio Gainax offers a freefall zaniness similar to Excel Saga or Burn Up Excess, but with more appealing characters and sharper parodies. Twelve-year-olds Sasshi Imamiya and Arumi Asahina have grown up together in Osaka, but when the local shopping arcade closes, the harmony of the four Chinese directional gods is thrown out of whack. Sasshi and Arumi visit parallel universes, each boasting transmogrified Shopping Arcades that parody Evangelion, Fist of the North Star, 2001, Voltron, and Star Wars. The reluctant heroes attempt to return to their real home, impeded by their relatives and friends, who form a sort of interdimensional repertory company. The voice actors affect Texas accents to approximate the rough Osaka dialect of the original, which takes some getting used to, but the results are outrageous--and hilarious. (Rated 17 and older: gross and risqué humor, brief nudity, violence, minor profanity, alcohol use) --Charles Solomon
Product Description
Erotically charged anime tale about two friends who are whisked away to a mystical video game-like world where they're forced to contend with giant mushrooms, ninja assassins, a bizarre transvestite, a sorcerer in the throes of a mid-life crisis, and a crew of well-endowed lady space pirates. 100 min. Soundtrack: Japanese; Subtitles: English.
... [Full Description]