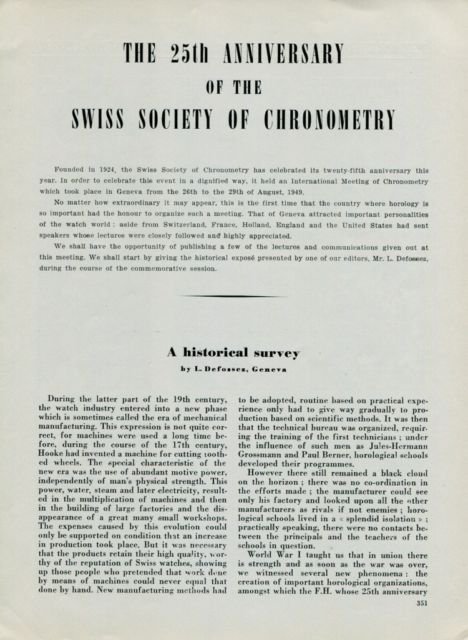 Text in the articles is in English.

The preface to the articles reads:

"Founded in 1924, the Swiss Society of Chronometry has celebrated its twenty-fifth anniversary this year. In order to celebrate this event in a dignified way, it held an International Meeting of Chronometry which took place in Geneva from the 26th to the 29th of August, 1949.

"No matter how extraordinary it may appear, this is the first time that the country where horology is so important had the honour to organize such a meeting. That of Geneva attracted important personalities of the watch world: aside from Switzerland, France, Holland, England and the United States had sent speakers whose lectures were closely followed and highly appreciated.

"We shall have the opportunity of publishing a few of the lectures and communications given out at this meeting. We shall start by giving the historical expose presented by one of our editors, Mr. L. Defossez, during the course of the commemorative session."

The magazine articles were carefully removed from a Swiss magazine.

[Please note: these are magazine articles/magazine clippings only; no watch, clock, parts or tools are included.]

As with most vintage magazine clippings, there is some yellowing to the paper due to age as well as light wear and small bends.

The magazine articles were carefully removed directly from a Swiss magazine. They are not a copy or reproduction. The rest of the magazine is not included.

[Please note: these are magazine articles/magazine clippings only; no watch, clock, parts or tools are included.]

Other Products from vintagepaperandsalvage (View All)