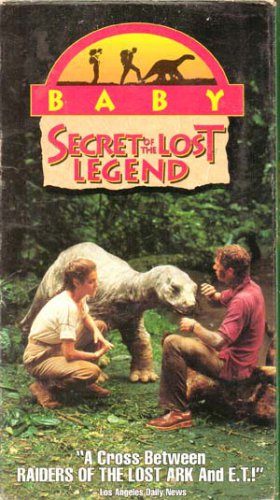 Directed by Bill L. Norton - Starring William Katt, Sean Young, Patrick McGoohan - Mill Creek - 1985 - Rated PG - 95 min - Adventure Drama - Animal Picture
Eight years before the dinosaur mania created by Jurassic Park, Bill L. Norton released this more dinosaur-friendly story about a 10-foot baby dinosaur in dire straits in Africa because Dr. Eric Kiviat (Patrick McGoohan), an evil paleontologist, is after it with a vengeance. He is the nemesis of Dr. Susan Matthews-Loomis (Sean Young) -- determined to save the baby from its hunters -- and her husband George Loomis (William Katt), a sportswriter who shares her protective instincts. Kiviat has recruited a revolutionary army to help him capture the baby's mother -- which they manage to do without killing her. The army has already shot down the father dinosaur, and so their own instincts are far from protective. As the husband and wife and baby dinosaur are united at last in their attempts to survive, the next step is to recapture Mom dinosaur and get away from the army and Kiviat, not an easy feat