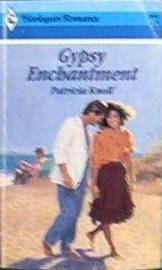 "You think I've cast a spell on your uncle?" Ben Andrews returned to San Diego to find his Uncle Hank completely changed and he blamed Tonia Meier, the very attractive gypsy he discovered at the family's San Diego beach house. Tonia was taken aback by Ben's accusations. As if she would try to snare a man into marriage! But she quickly realized that Ben was only trying to protect his uncle. She insisted they were both the victims of one of Hank's practical jokes. But Ben exploded at that. "I've got news for you my uncle's never played a practical joke in his life!".