The Tri-Colored Diet by Martin Katahn 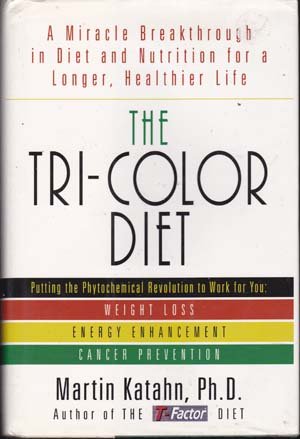 270 Pages, Like New.By now, most people who have tried some of the recent fad diets have realized that those diets don’t work; weight lost in the initial stages is eventually gained back, leaving the dieter at the same weight as before, or even heavier. What does work, however, is the program outlined in The T-Factor Diet, the groundbreaking book that has sold well over a million copies since initial publication. Its runaway success launched the best-selling T-Factor Fat Gram Counter and its companion guides, changing a nation’s attitude toward high-fat foods. This book’s scientifically proven advice remains true today: by understanding the "T-factor" or thermogenic effect, in which carbohydrate calories are burned faster than fat calories, you can lose weight quickly and safely, and keep it off—all without going hungry. Dr. Martin Katahn explains how to choose foods that naturally maximize the T-factor level, thus activating the body’s hidden fat-burning potential; he also includes exercises, recipes, and meal plans
... [Full Description]