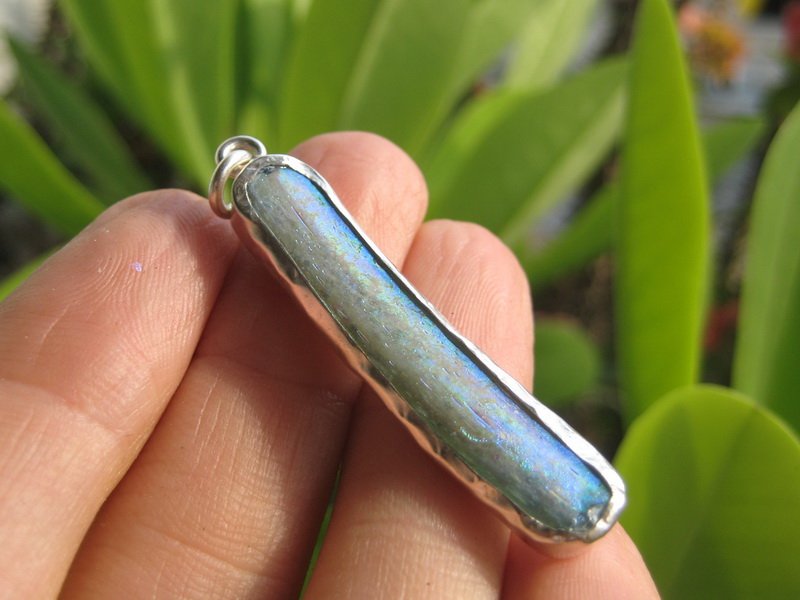 Tweet
This is a beautiful 925 Silver Old Roman Glass hand made pendant from Afghanistan. The glass bead age is around 1200 to 1900 years old. The silver setting was done recently to make the glass into a pendant. It has a nice patina of colors due to age.
Some history of Roman Glass: The Roman Empire began extending around the birth of Christ under the rule of Julius Caesar who became appointed dictator in 44 BC and reached its territorial peak under Emperor Trajan. Its borders extended from Spain, North Africa and England to the East and India Israel and Afghanistan to the West. The Western Roman Empire collapsed in 476 AD however the Eastern portion endured until and invasion of the Turks brought about its end in1453.

By the end of the first century AD large scale manufacturing resulted in the establishment of glass as a commonly available material in the Roman world. Interesting many sailing vessels were made of Glass. The invention of glass blowing techniques by the Phoenicians aided this endeavor. Glass making reached its peak around the second century AD. The major component of the glass is silica, which during the Roman period was sand quartz), which contains some alumina (typically 2.5%) and nearly 8% lime.[ Alumina contents vary, peaking around 3% in glasses from the Western Empire remaining notably lower in glasses from the Middle East. Glasses formed of silica and soda are naturally soluble, and require the addition of a stabilizer such as lime or magnesia. Lime was the primary stabilizer in use during the Roman period, entering the glass through calcareous particles in the beach sand, rather than as a separate component.

Roman glass has also been shown to contain around 1% to 2% chlorine, in contrast to later glasses. This is thought to have originated either in the addition of salt (NaCl) to reduce the melting temperature and viscosity of the glass.

Aqua a pale blue-green color is the common natural color of untreated glass. Many early Roman vessels are this color.

The natural aqua shade of the glass can be intensified with the addition of copper. During the Roman period this was derived from the recovery of oxide scale from scrap copper when heated, to avoid the contaminants present in copper minerals. Copper produced a translucent blue moving towards a darker and denser green.

Colorless glass was produced in the Roman period by adding manganese oxide. This oxidized the iron (II) oxide to iron (III) oxide, which although yellow, is a much weaker colorant, allowing the glass to appear colorless. The use of manganese as a deodorant was a Roman invention first noted in the Imperial period; prior to this, Antimony rich minerals were used.

I know whoever gets this pendant will treasure it on its beauty. Also there will be a special feeling knowing one is wearing a peice of Roman Empire history.