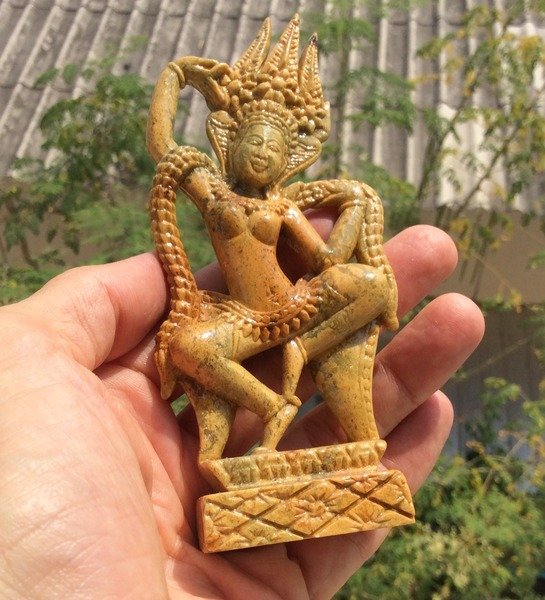 Tweet
This is a gorgeous Marble Apsala statue from Cambodia. I brought it back with me
from a recent trip there knowing someone would love to have it. The color pattern is
very interesting. A gloss was added to the surface of the stone to help bring out the
colors of the marble. In Cambodia this is a common practice for the marble statues as
without it the colors tend to be less vibrant. The Apsala goddess is know as one of
the many heavenly nymphs that came down from the heavens in the middle of the
night to keep the king of the Khmer Empire. Although he already had numerous concubines.
She is carved in many of the walls that form the countless temples and shrines in
Cambodia including the most famous Ankor Wat. Some history of the Ankor Wat Temple:
The Ankor period began in 802 A.D when King Jayavarman the second returned from
being exiled to Java and reclaimed his throne. He founded his capital the city of
Ankor which flourished and 200 years later under King Suryavarman the second Ankor Wat was constructed as his burial shrine. 50,000 men worked the main temple to completion in 37 years. However future rulers continued building countlessother smaller temples and monuments. Including the other two large temples of Ankor Tom and Bayon ( temple of a hundred Buddha heads ).Incidentally two factors that gave rise to such a powerful civilization at the time was
an effective political system and an advanced irrigation system to control water from the Mekong river for agriculture. An extensive road system extended up to modern day Laos, across into Thailand and down into southern Vietnam. Both Buddhism and Hinduism had influence in Khmer society. Hinduism played an important role in Khmer civilization as the Ankor Monarchs adopted as deva-raja, or “god-king” by which the king was revered as an incarnation of the god Shiva.
Most temples of Ankor are dedicated to either Shiva or Vishnu. Mahayana Buddhism also played a role in the influence of the society.About five centuries ago the Khmer Ankor civilization vanished with an invasion from Thailand and when it is believed that the capital was relocated to Pnom Penn.The city remained lost in the jungle until it was rediscover in 1860 by French
botanist Henri Mouhot who was exploring the Cambodian jungles. Even most locals believed the temple city was a myth.Ankor Wat stands as one of mankind’s greatest achievements.

No chips or damage