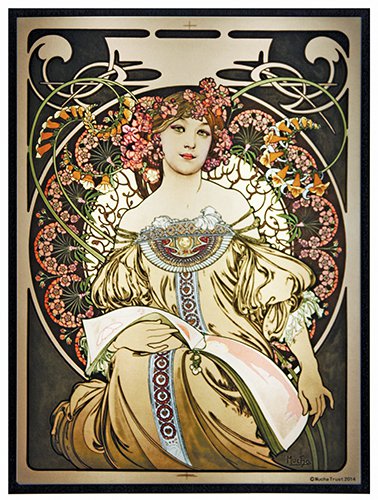 Young Alphonse Mucha had a beautiful singing voice which enabled him to earn his own secondary school fees in the Moravian capital Brno. However, drawing continued to be his great passion and - aged 19 - he left for Vienna where he worked as an apprentice draughtsman for a studio that designed and decorated theater scenery. Upon his return to Moravin (in what is currently the Czech Republic) his talent was spotted by the wealthy Count Karl Khuen-Belasi, who enabled him to study at the Akademie der Bildenden Kuneste in Munich. Mucha continued his studies in Paris, the Mecca of the art world at the time. He made extra money drawing illustrations for magazines and advertisements. Quite unexpectedly, this proved to be designed on the spot for the play Gismonda starting the legendary Sarah Bernhardt. A few weeks later, Paris was covered in posters and they were stolen en masse. Mucha instantly became the most in demand illustrator of the Belle Epoque. The artist was not entirely happy with the rapid triumph of Art Nouveau in the decorative arts. He kept emphasizing that his art followed his Slavic soul, not some fashionable trend. His inspirations were old religious art, symbolism and Japanese prints with their stylized lines and clear cut structure which had been rediscovered in the 19th Century.

Like Zodiac, this lithograph was originally designed to serve as the 1898 Champenois company calender. However, it's immediate popularity led to it's swift publication by the magazine La Plume as a decorative panel with the title Reverie (daydream). Mucha's design shows a dreamy-eyed young woman leafing through a book of decorative designs, possibly printer's samples. The prominent disk behind her is elaborately decorated with flowers and their stems forming a lace-like pattern.

The Mucha Foundation is an independent, non-profit charity devoted to preserving and conserving the Mucha Trust Collection and promoting the work of Alphonse Mucha.

The glass panel is made with hand applied, high quality color pigmentation that is kiln fired and fused to the glass in multiple layers creating rich color that will not fade or scratch off.

It is framed in metal with two eyelets to attach the included metal chain for hanging. Also included is an acrylic easel in the event you would prefer to display it on a table or shelf.