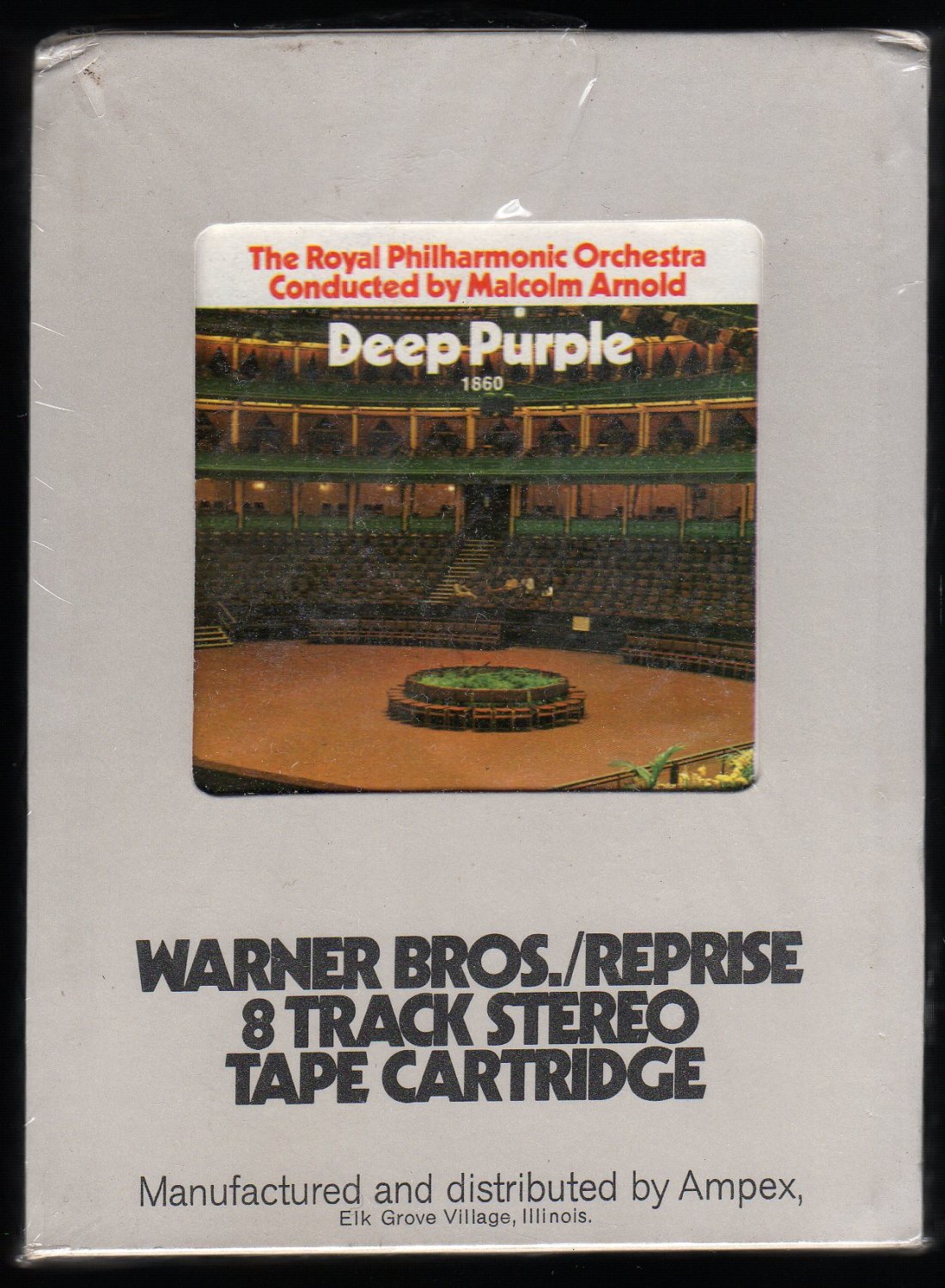 Tweet
Because this tape is sealed new and we cannot inspect for play-ability, we offer no warranty or guarantees on how well this tape will perform once it is opened and removed from the cellophane package. Because this sealed new 8-track tape is very old, the foam pad and glue on the foil splice most often has a tendency to deteriorate over many years of time. Always inspect and replace if necessary those items before playing any sealed new 8-track tape, or damage to the tape and player may occur.

The Concerto for Group and Orchestra is a concerto composed by Jon Lord, with lyrics written by Ian Gillan. It was first performed by Deep Purple and The Royal Philharmonic Orchestra conducted by Malcolm Arnold on 24 September 1969 and released on vinyl in December 1969. After the score was lost in 1970, it was performed again in 1999 with a recreated score. The 1969 performance was the first ever combination of rock music and a complete orchestra and paved the way for other rock/orchestra performances such as Metallica's S&M concert and Roger Waters's The Wall – Live in Berlin performance.

Deep Purple are an English rock band formed in Hertford in 1968. Along with Led Zeppelin and Black Sabbath, they are considered to be among the pioneers of heavy metal and modern hard rock, although some band members believe that their music cannot be simply categorized as belonging to any one genre. The band also incorporated classical music, blues-rock, pop and progressive rock elements. They were once listed by the Guinness Book of World Records as "the loudest pop group", and have sold over 100 million albums worldwide. Deep Purple were ranked #22 on VH1's Greatest Artists of Hard Rock programme.

The band has gone through many line-up changes and an eight-year hiatus (1976–84). The 1968–76 line-ups are commonly labelled Mark I, II, III and IV. Their second and most commercially successful line-up featured Ian Gillan (vocals), Ritchie Blackmore (guitar), Jon Lord (keyboards), Roger Glover (bass) and Ian Paice (drums). This line-up was active from 1969 to 1973 and was revived from 1984 to 1989 and again in 1993, before the rift between Blackmore and other members became unbridgeable. The current line-up (including guitarist Steve Morse) has been much more stable, although Lord's retirement in 2002 has left Paice as the only original member never to have left the band.

Perfect Strangers is the eleventh studio album by Deep Purple, released in October 1984. It represents the first album recorded by the reformed, and most successful and popular, 'Mark II' line-up.[1]

It was the first Deep Purple studio album in nine years, and the first with the Mk II lineup for eleven years, the last being Who Do We Think We Are in 1973. Ritchie Blackmore and Roger Glover arrived from Rainbow, Ian Gillan from Black Sabbath, Jon Lord from Whitesnake, and Ian Paice from Gary Moore's backing band.