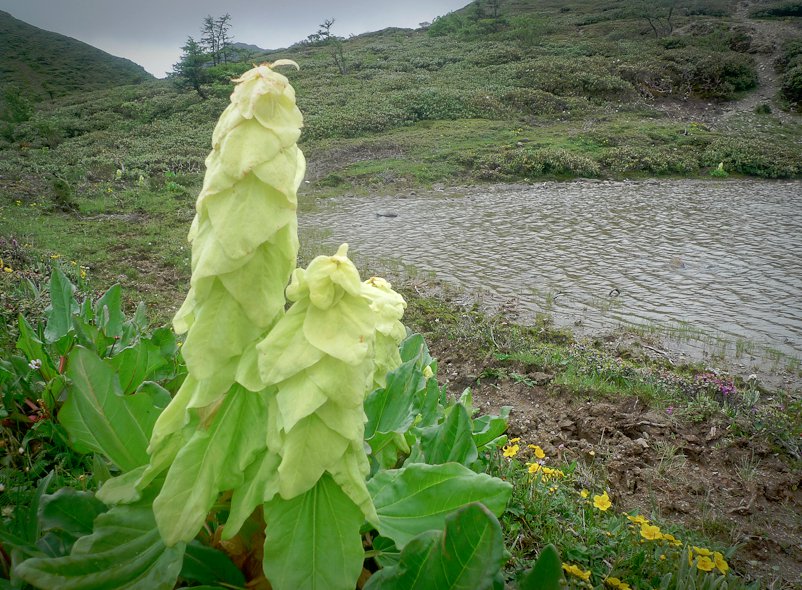 Very rare. Rheum alexandrae, is a herbaceous plant native to the Himalaya, from northeastern Afghanistan, east through northern Pakistan and India, Nepal, Sikkim (in India), Bhutan, and Tibet to Myanmar, occurring in the alpine zones.
It is an extraordinary species of rhubarb (genus Rheum) and it is visible across valleys a mile away. This Rheum is often called a glasshouse plant because of its outer curtain of translucent bracts which pass visible light, creating a greenhouse effect, while blocking ultraviolet radiation. This is a fabulous plant for a sunny spot.

Growth begins in the spring with the foliage emerging first. This is pale green and spoon-shaped with 3 or 4 obvious sunken veins running longitudinally. These are held on rigid petioles, upright at first but later laying flat.
In mid summer the flower stems are produced which reach around 4 foot tall carrying the flowers. The flowers aren't much to look at but the bright creamy-yellow bracts which cover them certainly are. These are heart shaped an hang pendulous from the stem just above the flowers, basically concealing the flower. Very showy perennial hardy to zone 3.
... [Full Description]