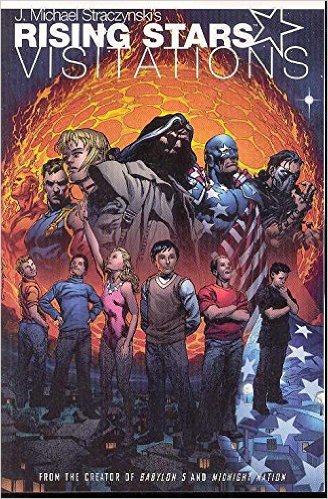 Tweet
Rising Stars is the story of the Pederson Specials, a group of 113 people empowered by a single event.
In the late Sixties a fireball struck the town of Pederson, Illnois granting fantastic powers to the 113 children who were in utero at the time of impact. They grew up as the world watched. Labeled the "Specials" by the Media, their powers were monitored and catalogued by the United States Government. Public perception of them changed often. Were they the future of mankind? A scourge? A random occurrence? Heroes? Villains? Role models or simply caricatures? What would be their impact on culture and society? They were a waried as kids and adults ever are; some were more powerful, some less. As adults they became many things: a policeman, a corporate symbol, a singer, an assassin, a writer, a painter, a thief, a preacher. Some found celebrity, some notoriety, while others simply went to work and raised families like everyone else. But they all carried inside them a seed of something great. Something special. Something that made them stars.
As their epic stories unfolded, there were other stories as well...of their lives and the lives of those around them. This book is about those stories. Collected here are the short stories about the Specials, a bit about their beginnings, a bit about their middles and just a little bit about their end.
Paperback: 64 pages
... [Full Description]