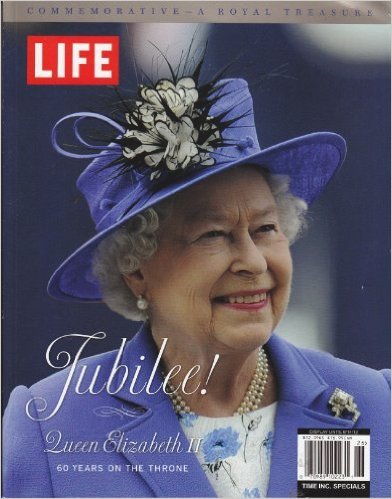 Tweet
In April of 2011 LIFE ventured to London for our bestselling book The Royal Wedding of Prince William and Kate Middleton. This June we return to capture all the pomp and circumstance as England celebrates its queen's 60th year on the throne. All of the best photography from the festivities will be in these pages-as will so much else. Directly descended from Victoria, Elizabeth is now on the verge of supplanting that great queen as Britain's longest serving monarch ever-and LIFE has had its cameras trained on her since she was a little girl. We were there to record her precocious courage during World War II, her splendiferous marriage to Prince Philip, her glittery coronation, her travails and dramas in the modern age. The other characters that come and go in these pages are equally famous and compelling: Wayward Uncle Edward who had to abdicate the throne, the Queen Mum and her hats, Elizabeth's father George VI who overcame his stammer to rally his countrymen during the war, Prince Charles, Lady Diana, the grandsons Will and Harry-and on and on. We see these people move through palaces opulent beyond belief (Buckingham, Windsor), and estates that dwarf Downton Abbey (Sandringham, Balmoral). We learn of their lives, their loves, their scandals. Ever with her head held high, there is Elizabeth II. Here is her royal story, told in its entirety.
Paperback: 96 pages
... [Full Description]