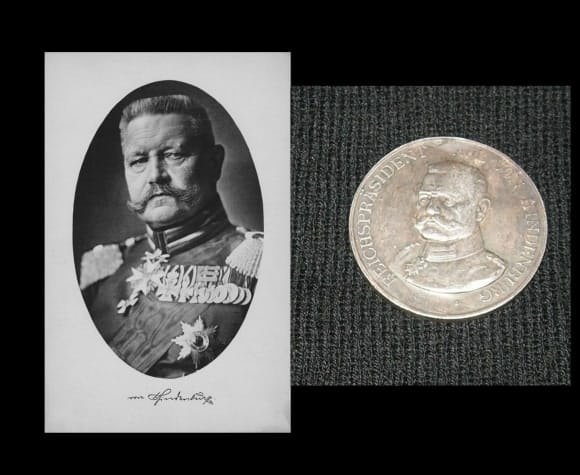 The date of the first strike of the medal is unknown but i believe it was on the 70th Birthday of the President.

On the front it has the image of Field Marshal Hindenburg in military uniform and the words:

and on the back a wrath of Oak Leaves, the symbol of High ranking officers of Prussia and later the Reich.
Approx. 4 cm in diameter and 1 oz. heavy!
Very Rare and a great edition to any collection!
Mailed via First Class Air Mail for Fast Delivery!
President of Germany (1919–45)
The Reichspräsident was the German head of state under the Weimar constitution, which was officially in force from 1919 to 1945. In English he was usually simply referred to as the President of Germany. The German title Reichspräsident literally means "President of the Reich", the term Reich referring to the federal nation state established in 1871.

The Weimar constitution created a semi-presidential system in which power was divided between the president, a cabinet and a parliament. The Reichspräsident was directly elected under universal adult suffrage for a seven-year term. It was intended that the president would rule in conjunction with the Reichstag (legislature) and that his emergency powers would be exercised only in extraordinary circumstances, but the political instability of the Weimar period, and a paralysing factionalism in the legislature, meant that the president came to occupy a position of considerable power (not unlike that of the German Emperor he replaced), capable of legislating by decree and appointing and dismissing governments at will.

In 1934, after the death of President Hindenburg, Adolf Hitler, already Chancellor, assumed the office of Presidency,[1] but did not usually use the title of President – ostensibly out of respect for Hindenburg – and preferred to rule as Führer und Reichskanzler ("Leader and Reich Chancellor"), highlighting the positions he already held in party and government. In his last will in April 1945, Hitler named Joseph Goebbels his successor as Chancellor but named Karl Dönitz as Reichspräsident, thus reviving the individual office for a short while until the German surrender.

The German constitution of 1949 established the office of Federal President(Bundespräsident), which is, however, a chiefly ceremonial post largely devoid of political power.
From Wikipedia
... [Full Description]

Other Products from coinsdepot (View All)