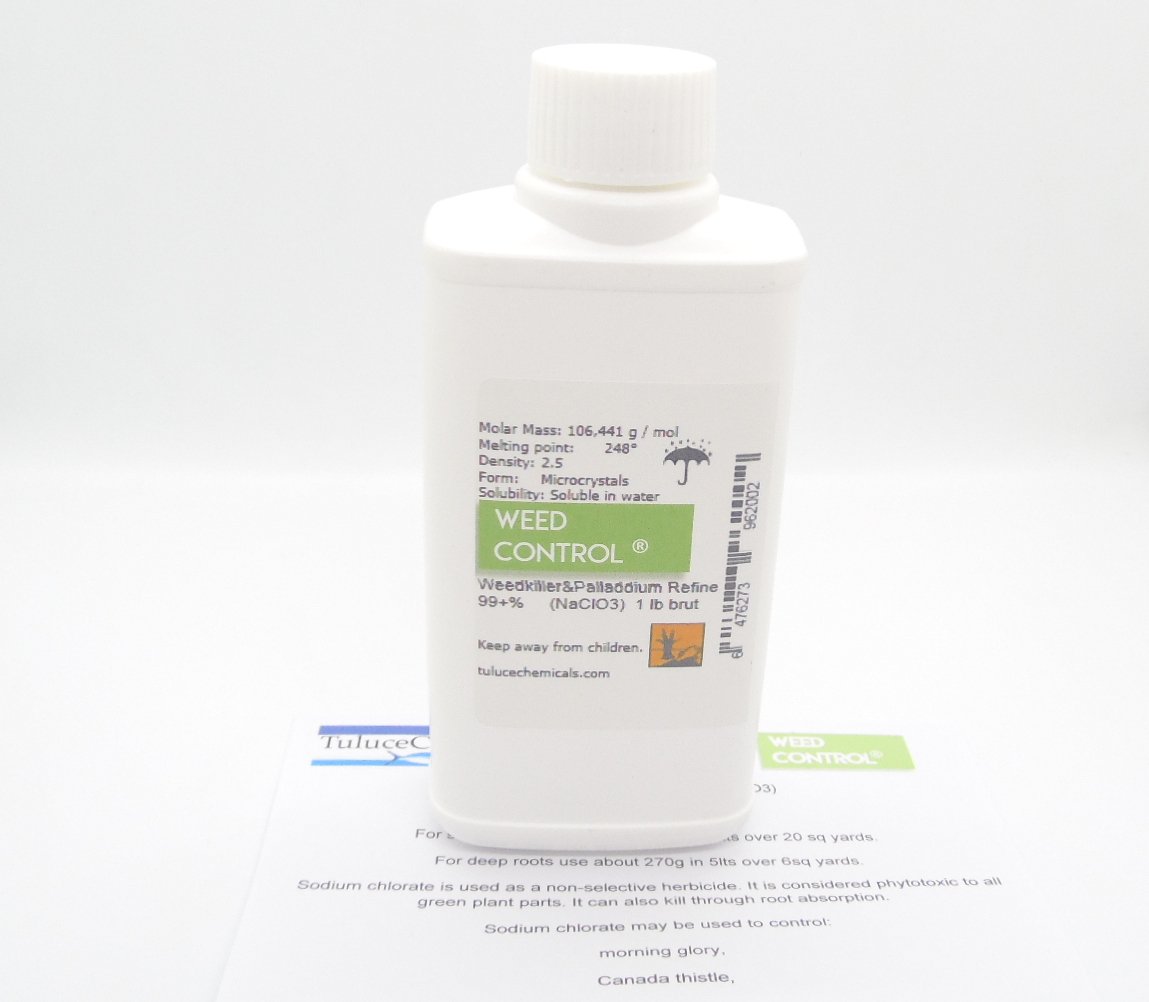 Sodium chlorate is used as a non-selective herbicide. It is considered phytotoxic to all green plant parts. It can also kill through root absorption.

Sodium chlorate may be used to control:

The herbicide is mainly used on non-crop land for spot treatment and for total vegetation control on roadsides, fenceways, ditches and suchlike.

Sodium chlorate is also used as a defoliant and desiccant for:

Chemical oxygen generator for example in commercial aircraft provide emergency oxygen to passengers to protect them from drops in cabin pressure by catalytic decomposition of sodium chlorate. The catalyst is normally some iron powder. Barium peroxide (BaO2) is used to absorb the chlorine which is a minor product in the decomposition.[1]

Sodium chlorate is used in some aircraft as a source of supplemental oxygen. Iron powder is mixed with sodium chlorate and ignited by a charge which is activated by pulling on the emergency mask. The reaction produces more oxygen than is required for combustion.

Due to its oxidative nature, sodium chlorate can be very toxic if ingested. The oxidative effect on hemoglobin leads to methaemoglobin formation, which is followed by denaturation of the globin protein and a cross-linking of erythrocyte membrane proteins with resultant damage to the membrane enzymes. This leads to increased permeability of the membrane, and severehemolysis. The denaturation of hemoglobin overwhelms the capacity of the G6PD metabolic pathway. In addition, this enzyme is directly denatured by chlorate reducing its activity.

Therapy with ascorbic acid and methylene blue are frequently used in the treatment of methemoglobinemia. However, since methylene blue requires the presence of NADPH that requires normal functioning of G6PD system, it is less effective than in other conditions characterized by hemoglobin oxidation.

Acute severe hemolysis results, with multi-organ failure, including DIC and renal failure. In addition there is a direct toxicity to the proximal renal tubule[2]. The treatment will consist of exchange transfusion, peritoneal dialysis or hemodialysis.[3]

Sodium chlorate comes in dust, spray and granule formulations. There is a risk of fire and explosion in dry mixtures with other substances, especially organic materials, that is other herbicides, sulfur, phosphorus, powdered metals, strong acids. Particularly when mixed with sugar it has explosive properties. If accidentally mixed with one of these substances do not store inside your home, garage etc.[4]

Marketed formulations contain a fire depressant, but this has little effect if deliberately ignited. Most commercially available chlorate weedkillers contain approximately 53% sodium chlorate with the balance being a fire depressant such as sodium metaborate or ammonium phosphates.

The active ingredient sodium chlorate is found in a variety of commercial herbicides. Some trade names for products containing sodium chlorate include Atlacide, Defol, De-Fol-Ate, Drop-Leaf, Fall, Harvest-Aid, Kusatol, Leafex, and Tumbleaf. The compound may be used in combination with other herbicides such as atrazine, 2,4-D, bromacil, diuron, and sodium metaborate.
... [Full Description]