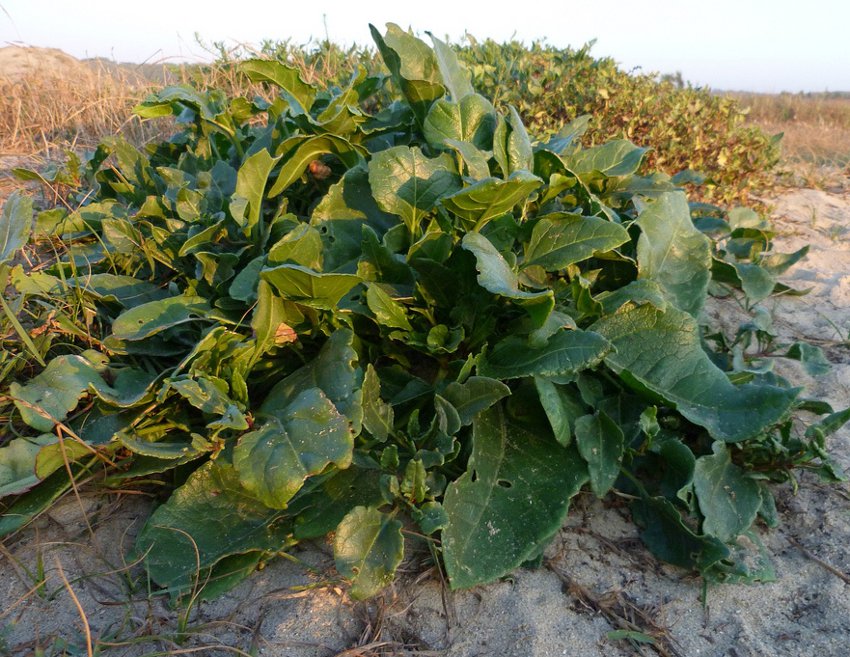 The Sea beet is an aristocrat in the world of wild greens. Like many true aristocrats, it has an unkempt appearance that belies its pedigree. It is the wild ancestor of common vegetables such as beetroot, sugar beet, and Swiss chard. Its leaves have a pleasant texture and taste when served raw or cooked, and because of this, it is also known as wild spinach. It remains very important as source of useful traits for beet breeding.
Sea Beet is a sprawling perennial to 4 Foot tall, with large triangular or oval leaves with spikes of green flowers that appear during the months of July to September. Its flowers are hermaphroditic, and wind-pollinated. It requires moist, well-drained soils, and does not tolerate shade. However, it is able to tolerate relatively high levels of sodium in its environment. Sea beets are found at tide-lines, shingle beaches, sea-walls and in salt marshes. It remains very important as source of useful traits for beet breeding
It is rich in vitamins and mineral has many medicinal values. It said to be used for tumors. We encourage research on this wonderful rare plant.
Note: The safe consumption of aquatic plants as food is dependent on a variety of conditions, some outside your control. Research on how to properly prepare water vegetables for consumption. We provide germination guidelines but we do NOT provide instructions for food preparation.
Other names: Beta vulgaris var. maritima, wild spinach, sea spinach
... [Full Description]