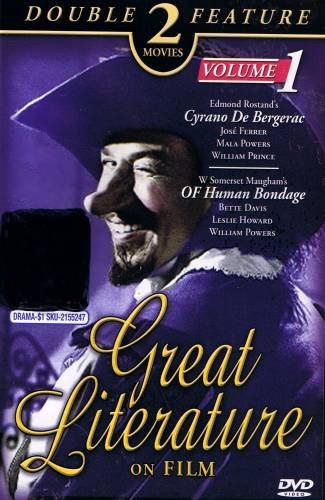 CYRANO DE BERGERAC: (1950)
Recreating his stage role, Jose Ferrer stars as Edmond Rostand's Cyrano, a 17th-century French cavalier, poet and swordsman whose prominent proboscis is the subject of many a duel. Cyrano is madly in love with the beautiful Roxanne (Mala Powers), but assumes that she'd never love him back due to his cathedral of a nose. Roxanne is also loved by the handsome Christian (William Prince), who unfortunately can't put two consecutive words together when it comes to pitching woo. Cyrano agrees to help Christian win Roxanne by feeding him the right words for his midnight courtships and love letters; in this way, Cyrano can vicariously express his own ardor for the fair lady. Years later, Cyrano's deception is revealed, and he dies happily in the arms of his beloved Roxanne, who realizes that she has really loved Cyrano all along--by way of Christian. Cyrano de Bergerac wasn't seen by many paying moviegoers upon its original showing, but its relative box-office failure resulted in an early release to television, where it has remained a perennial attraction for the past forty years. ~ Hal Erickson, All Movie Guide
OF HUMAN BONDAGE: 1934

Leslie Howard plays Philip Carey, a club-footed student of painting in Paris, who realises that his work will only ever be second rate so returns to England to study medicine. In a restaurant he meets, and falls for Mildred, a blonde waitress (Bette Davis), who breaks a date with him to go out with an artless salesman. Carey meets and is subsequently courted by, the sophisticated Norah but he cannot forget the waitress. Mildred visits his apartment explaining that she is pregnant. Although Carey suggests marriage, she deserts him again, this time for Harry Griffiths a fellow student. Mildred returns once more, this time with the child but, although giving her shelter, Carey refuses her sexual advances and she destroys his belongings while he is out. Bonds that he needs to finance his studies are among these items and he is forced to leave medical school and become a salesman - but he becomes depressed and his health suffers. He is nursed back to health by Sally Athelny and her father. Later he inherits sufficient money from an uncle to allow him to complete his medical studies and have corrective surgery for his club foot. On qualifying his application for a job as a medical officer on a steamship to Australia is accepted. He learns that Mildred has been admitted to the hospital with tuberculosis but she dies before he is able to see her. Released from his emotional bondage, he turns down the job at sea and is now free to marry Sally. The original movie adaptation of the tragic tale by Somerset Maugham is an exceptionally high quality production; the remakes in 1964 and 1964 being very poor in comparison. Leslie Howard and Bette Davis give brilliant performances which are enhanced by John Cromwell's sensitive direction. The role of the vulgar waitress Mildred had already been turned down by Katharine Hepburn, Ann Harding and Irene Dunne but the talented Bette Davis adopting a cockney accent (even off stage) made this, her first major role, her own.
DVD IN LIKE NEW CONDITION.
... [Full Description]