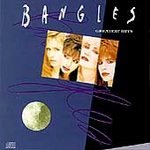 Album notes
The Bangles: Susanna Hoffs, Vicki Peterson (vocals, guitar); Michael Steele (vocals, bass); Debbi Peterson (vocals, drums).
Producers: Rick Rubin, David Kahne.
Engineers include: David Kahne, Tchad Blake, Peggy McLeonard.
Recorded at Crystal Sound, Skyline Recorders and Sound Castle, Los Angeles, California; Sunset Sound Factory and Sunset Sound, Hollywood, California. Includes liner notes by Mark Rowland.
Somewhat unfortunately, 1990's GREATEST HITS covers only the Bangles' years at Columbia Records, meaning that their great garage-rocking debut single, "Getting Out of Hand," and their fantastic self-titled 1982 EP are MIA. Also, the collection focuses almost exclusively on the Los Angeles power poppers' singles instead of their moodier and more experimental album tracks, giving a rather unbalanced portrait of the band. That said, the singles are excellent, from the classic no-nonsense beat-pop of "Hero Takes A Fall" and "Walking Down Your Street" to languid ballads like the heartbreaking "If She Knew What She Wants" and "Going Down To Liverpool." Their non-LP version of Paul Simon's "Hazy Shade of Winter" is also including sparing you from the embarrassment of owning the soundtrack to the wretched LESS THAN ZERO. The set closes with two previously unreleased tracks including a terrific folk-rock cover of Gary Zekley's "Where Were You When I Needed You."
Tape in good condition.
... [Full Description]