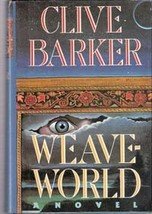 Tweet
Weave-world by Clive Barker, Hardback with Dust Jacket. Published by Poseidon Press a Div. of Simon & Schuster, 1987. 584 pages.
The novel revolves around the world of the Fugue, a magical world which lies woven within a rug. Many decades ago the Seerkind (creatures of magical abilities) decided to hide themselves through a spell or "Rapture" in a safe haven after being hunted down and eradicated by humans for centuries (with humans most commonly depicting them as demons and fairies in their mythological tales) as well as being decimated by a destructive being known as The Scourge. This creature's form is entirely unknown to the Seerkind, given that none of those assaulted by the Scourge survived to describe it. The Seerkind collect a number of beautiful places, hills, meadows and mountains, alongside their belongings and themselves and undergo a spell which encloses all of them in a rug. They also leave the wife of one of their kind, a non-seerkind woman named Mimi Laschenski, outside in the human world with the purpose of keeping and guarding the rug and also unleashing the world of the Fugue someday when the world had become a safe place for them. Eight decades later, a sudden interest emerges for the rug at the time an elderly Mimi (having recently gone through a stroke in her old age) expires: Calhoun Mooney, an ordinary young man, accidentally comes into contact with the rug and realises its magical nature; Suzanna Parish, Mimi's granddaughter is given clues to the rug's existence from her grandmother (who can no longer speak since the stroke) and moves to uncover its secrets; Immacolata, exiled by the Seerkind into the human world, wants to find the rug and destroy her race. Cal and Suzanna join forces against Immacolata, her dead sisters and a greedy human known as Shadwell. The second part of the book develops within the world of Fugue, unleashed from within the rug, and deals with the struggle of characters for the control of this world. The third part sees the Fugue destroyed, with the surviving Seerkind, Cal and Suzanna hiding in the forests of Scotland and facing the ultimate battle against the resurrected Scourge.
... [Full Description]