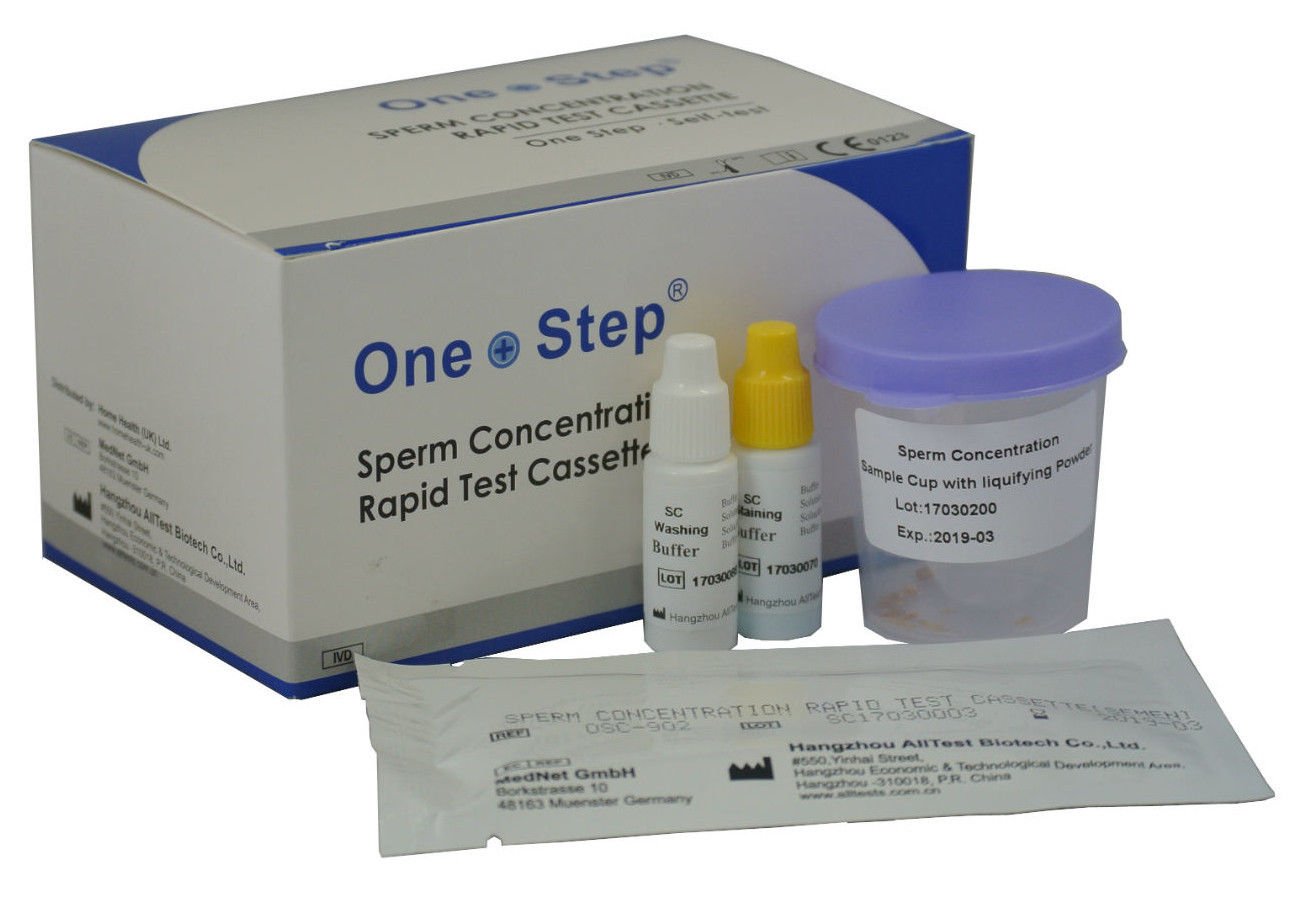 The Male Fertility test is a rapid diagnostic test of sperm concentration in semen. Sperm count is widely recognised as the major indicator of the fertility in men.

The Male Fertility test kits are a unique home test that will indicate if a man's sperm concentration is greater or less than the devices cut off point, 20 million sperm per mL of sperm. A positive result is going to be good news although it is not proof of fertility. A negative result suggests that the man should consult with his doctor as he is close to being sub-fertile, which is not all bad news, because it does at least save a couple months of trying for a baby when there maybe issues to resolve.

This Male Fertility test kit will allow a man to test his fertility potential, privately and discreetly in his own home.

Before testing, it is important that you refrain from any sexual activity for 3-7 days. This ensures that the volume and quality of sperm is at its peak and the test will then be an accurate determination of sperm count. Using masturbation, the semen should be expelled directly into a sperm collecting cup. The Test should then be carried out within a maximum of 2 hours. Once the test is carried out the result must be read within 5 minutes as the colour intensity of the test result will fade over time. As there are two tests you may like to photograph the test to compare results and also if you are unsure if the result is positive or negative. Some people have difficulty with colours and colour intensity and in these instances a photograph will help us (our contact details are below) confirm the result for you if you need to get in touch.

2.Gently shake the semen occasionally in the semen collecting cup and allow to stand for 15 minutes at room temperature until the semen becomes fluid. Do not use sperm that is longer than 12 hours old.

3.Remove the test panel from the foil pouch and lay it horizontally on a flat surface. Using the pipette from within the foil pouch collect a sample of the semen and put one drop of semen into Sample Well marked ?A?.

4.Once the semen has soaked into Well "A" add three drops of the blue staining solution (the bottle is labelled with 2 blue bands) to the same Test Well "A" using one of the smaller pipettes provided. Let it soak for 1-2 minutes.

5.Now add two drops of the transparent washing buffer (the bottle is labelled with 2 pink bands) to Test Well ?A?, and let it soak for 1-2 minutes, and then read the results immediately.


INTERPRETATION OF RESULTS
Compare colours of test Well A to reference Well B.

Positive results: The colour of test well A is darker than the standard colour of reference Well B, and that means the sperm count is greater than 20million/ml and sperm count is normal or high.

Negative results: The colour of test well A is lighter than the standard colour of reference Well B, and that means the count of sperm is less than 20million/ml, and sperm count is low. This is known as oligospermia (a range that is normally between 5million/ml and 20million/ml).

Other Products from fashionistasale (View All)