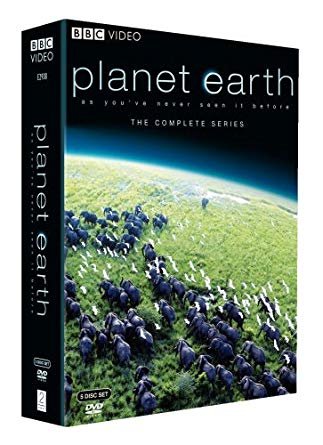 With an unprecedented production budget of $25 million, and from the makers of Blue Planet: Seas of Life, comes the epic story of life on Earth. Five years in production, over 2,000 days in the field, using 40 cameramen filming across 200 locations, shot entirely in high definition, this is the ultimate portrait of our planet. A stunning television experience that captures rare action, impossible locations and intimate moments with our planet's best-loved, wildest and most elusive creatures. From the highest mountains to the deepest rivers, this blockbuster series takes you on an unforgettable journey through the daily struggle for survival in Earth's most extreme habitats. Planet Earth takes you to places you have never seen before, to experience sights and sounds you may never experience anywhere else.


Special features
The 11-part series shot entirely in high-definition: From Pole to Pole, Mountains, Fresh Water, Caves, Deserts, Ice Worlds, Great Plains, Jungles, Shallow Seas, Seasonal Forests, Ocean Deep
Original U.K. broadcast version narrated by David Attenborough, including 90 minutes not shown on the Discovery Channel
110 minutes of behind-the-scenes footage - one 10-minute behind the scenes program for each episode (included on standard-definition DVD release only)
Planet Earth: The Future: This 3-part, 2 1/2 hour comparison series looks at what the future may hold for endangered animals, habitats and -- ultimately -- ourselves. Following the environmental issues raised by Planet Earth, it asks why so many species are threatened and how they can be protected in future. (included on standard-definition DVD release only)