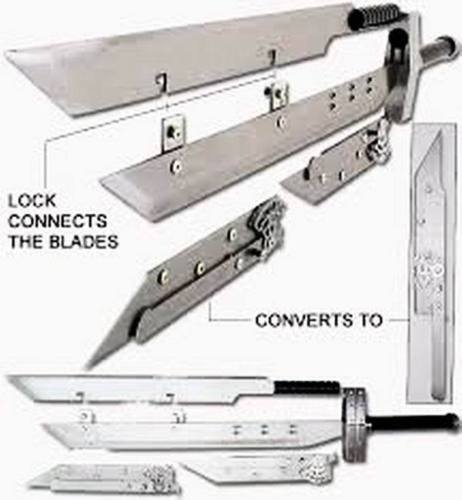 After much demand; the huge sword first seen in the seventh installment of the famous game series, Final Fantasy has been made available at our store. The substantially large broadsword is seen in the game series on several occasions, mostly as an iconic image with Cloud Strife, however its original owner was Angeal Hewley. The humongous was forged by Angeal’s father and it eventually passed on to Cloud. The attractively large size and design along with its extensive use throughout the series is what attracts fan appeal for this particular Buster sword.

Description of Product:
The Cloud Buster sword that has gained much popularity after its use as the trademark sword of the protagonist Cloud in the Final Fantasy series. The much awaited sword is finally available at our store with the following specifications:

• The huge sword stretches to an overall length of 43.5 inches!
• The blade consists of segments and has a total length of 32 inches and a width of 5 inches.
• The blade is made up of four different smaller blade segments and can be dismantled just like in the movie.
• The handle extends to up to 11.5 inches and is made up of heavy metal and has black leather wrapped for providing an easy grip to the heavy sword.
• The blade is very careful with a weight that goes up to 4.46Kg, be careful handling it!
• It comes with a free wooden stand that you can use to show off the most popular final fantasy blade!

The Cloud sword:
The Cloud buster sword is classified as a sword that is both enormous and heavy, requiring great physical strength to wield and use. The sword has a single edged blade that has a lighter color on the edges and the handguard is bolted and riveted into its place. In the Advent Children, the hanguard is gold colored and there are etchings engraved near the handguard. The sword is seen on various occasions in the game series most often being possessed by the main character of the game, Cloud. The cloud makes its first appearance in Final Fantasy VII, Advent Children and since then takes very little variation throughout all sequels of the game series.

Background:
The game final fantasy revolves around a group of characters battling evil where the main antagonist influences the game world and has to be defeated by the main character in use. Cloud is the main protagonist in the series since Advent Children (Final Fantasy VII). A warrior who prefers two handed swords has his trademark weapon, the cloud sword, an extensively large and heavy sword that is seen on several occasions in the game wield by Cloud. Before Cloud, the massive sword was wield by Angeal Hewley and Zack Fair, originally being forged by Angeal’s father, who, eventually passed away in the process, to aid him when he he joined SOLDIER (an elite force shown in the game series). Angeal though, did not use the sword much and kept it safe in memory of his father. Angeal is also the mentor of Zack Fair (who is also part of SOLDIER but a lower class member). Eventually, after Angeal, a creature not human (yet dreams to be one) with lack of complete control over himself turns into a chimera known as Angeal Penance, Zack is forced to destroy him and hence wields the Buster Sword from then on as Angeal, while dying, entrusts the blade to Zack as a symbol of honor and his dreams. Zack is seen to use the sword much more than Angeal however he does take care of the edges of the sword, making sure it does not get damaged. Later onwards, Zack is gunned just outside Midgar and he passes on the sword to Cloud, telling him it represented his living legacy. Cloud Strife is a blonde spiked haired, muscular yet tall swordsman who wields the sword for most of the Final Fantasy series from Advent Children and all its sequels. Even though Cloud believes that he is a member of SOLDIER from memories, he learns through friends that physical strength and power is not all that makes a hero. The game and movie revolve around Cloud Strife being the main protagonist and defeating the evil villain Sephiroth, whose cells are used to create three warriors, Kadaj, Loz and Yazoo who seek to regenerate Sephiroth. Eventually after Sephiroth is reborn, an intense battle rises between Cloud and Sephiroth who fight till the last breathe until Cloud uses his cloud sword to destroy Sephiroth and killing the three warriors. Sometime after Advent Children, Cloud places the sword on the cliff where Zack died as a tribute and memorial for him.