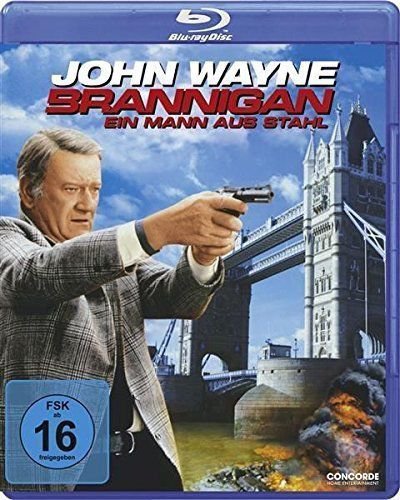 John Wayne "fans will not be disappointed" (Boxoffice) with this "crowd pleaser" (Los Angeles Times) that teams him with OscarÂ® winner Richard Attenborough in an "action entertainment for the whole family" (Boxoffice). Highlighted by "unbelievably cleaver dialogue" (The Hollywood Reporter), "the most imaginative action sequences ever to be staged against the London landscape" (Films & Filming) and Wayne's "magnetic screen presence" (L.A. Herald), this film, like the Duke himself, is unbeatable!

Wayne plays Brannigan, a tough Chicago cop who travels to London to hunt down an escaped gangster. When British officials lose track of the racketeer, Brannigan takes charge and shows stodgy Scotland Yard how things are done the good old American way. But Brannigan's also being tailed by a hit man...and must bulldoze his way through danger to face his enemies in not one, but two deadly showdowns! From a death leap across the Tower Bridge to a brawl in a Victorian Pub, Brannigan delivers!