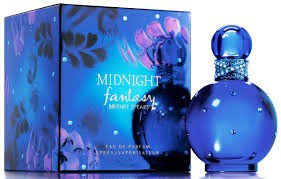 Tweet
Fantasy Midnight Perfume by Britney Spears, For when you want to feel a little mysterious during your evening, you need to wear fantasy midnight by britney spears. This fragrance came out in 2006, and while it is aimed toward a younger generation, women of all ages can enjoy its intoxicating aroma. The top notes you will find include plum, black cherry and exotic framboise. The heart contains a harmonious combination of iris, freesia and night orchid. The base brings everything together with vanilla, musk and amber. Britney spears is perhaps the most famous pop star this side of madonna. She has released numerous number one singles and has had worldwide tours. Starting in 2004, she began releasing fragrances under her name. This amazing perfumes would not be possible without great assistance, and for fantasy midnight, caroline sabas was brought onboard to lend a helping hand. Sabas has worked with a number of pop stars in addition to britney, including rihanna, shania twain and faith hill. When you are anticipating an adventurous evening ahead, then this perfume is right for you. It has a long-lasting scent that persists no matter what your activities entail, so even if you are going to the club to dance the night away, you will still smell fantastic at the end of it.
... [Full Description]