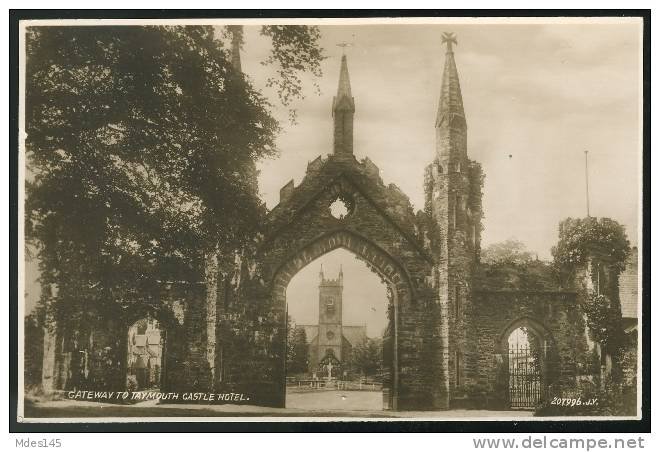 Tweet
Title: Gateway to Taymouth Castle Hotel Situated on the southern banks of the River Tay, Taymouth Castle is an early 19th century mansion house which lies a mile (2 km) northeast of Kenmore. It was once the seat of the Campbells of Breadalbane and was the centre of one of the largest estates in Scotland, which stretched from here to the west coast, approaching 182,000 ha (450,000 acres) in size. Taymouth was built by John Campbell, the 1st Marquis of Breadalbane from 1806 and incorporated part of the former Balloch Castle, which had been built in the 16th C. for Sir Colin Campbell of Glenorchy. The interior was designed by the architect James Gillespie Graham (1776 - 1855). Queen Victoria stayed here in 1842. Taymouth Castle operated for a time as a hotel, then during World War II as a convalescence home for recovering servicemen. It remains in private ownership but is now largely empty, except for its function as a club house for the adjacent golf course. In 2003, plans were put forward to turn it into a grand hotel once again............Source Gazetteer for Scotland
Era/style: Real Photo Post Card Sepia tones
Publisher: Valentines Great Britain
Postally used: No
Size: Standard 3.5 X 5.5
Condition: Excellent vintage condition - no rips or creases - corners good - slight curl to photographic paper
Please look at scans carefully for condition.
DEEBH B88
... [Full Description]

Other Products from noseyparkerspostcards (View All)