The Iron Sibyl in San Francisco 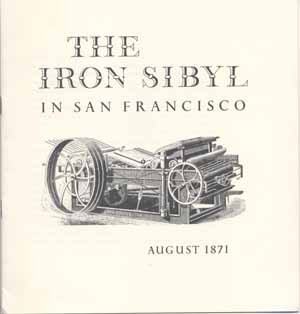 Tweet
This nine page booklet was taken from the Industrial Fair Gazette of August 16, 1871. The Gazette reported on the eighth Industrial Fair which was held in San Francisco from August 8 to September 9, 1871. This extract discusses the Commercial Steam Printing House of Francis and Valentine, one of the largest such firms on the Pacific Coast, and in particular discusses the make and type of the presses used.

Printed for the members of the Zamorano and Roxburghe Clubs for their meeting in September, 1972.
... [Full Description]