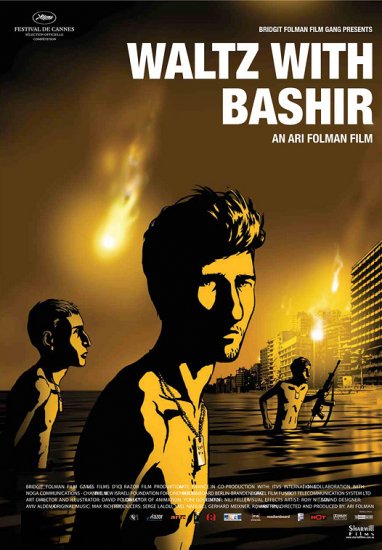 Tweet
Ari Folman's WALTZ WITH BASHIR Movie Poster 4' x 5' Rare 2008 NEW. Very Large Wall Size 40" inches wide by 60" inches high. Original Official USA Advance Release Advertising Poster for the December 25th 2008 Limited theater release of the film " Waltz With Bashir " featuring a beautiful animation graphic from the film. Waltz with Bashir ( Hebrew: ואלס עם באשיר, Vals im Bashir ) is a critically-acclaimed 2008 animated film directed by Ari Folman. Other credits include David Polonsky (Art Director), Yoni Goodman (Chief Animator) and Max Richter (score). It took four years to complete and is an international co-production between Israel, Germany and France. The film deals with the 1982 Sabra and Shatila massacre.
The film belongs to a rare genre called the "animated documentary". It entered the competition for the Palme d'Or at the 2008 Cannes Film Festival, and received wide critical acclaim at its premiere, however lost in competition for the prizes despite predictions made during the festival week. The Guardian called it "an extraordinary, harrowing, provocative picture". The film won six awards of the Israeli Film Academy, including Best Picture. The film was featured in the 46th New York Film Festival, where it also had its US premiere on October 2nd, 2008. The film is the Official Israeli entry for Best Animated Feature at the 2008 Academy Awards. In 1982 Folman was a 19 year old infantry soldier in the Israel Defense Forces. In 2006 he meets with a friend from the army service period, who tells him of the nightmares connected to his experiences from the 1982 Lebanon War. Folman is surprised to find out that he does not remember a thing from the same period. Later that night he has a vision from the night of the Sabra and Shatila massacre the reality of which he is unable to tell. In his memory he and his soldier friends are bathing at night by the seaside in Beirut to the light of flares descending over the city. Folman rushes off to meet another friend from his army service, who advises him to discuss it with other people who were in Beirut at the same time to understand what happened there and to relive his own memory. The film follows Folman in his conversations with friends, a psychologist and the reporter Ron Ben-Yishai who was in Beirut at the same time. The film takes its title from a scene in which one of the interviewees, the commander of Folman's infantry unit at the time of the film's events, grabs a heavy machine gun and "dances an insane waltz" amid heavy enemy fire, between walls hung with posters of Bashir Gemayel. This New Original Poster is Printed in Beautiful Brilliant Razor-sharp 6 color production on thick advertising poster stock paper. Will be carefully rolled and shipped in a heavy duty tube and shipped Priority Mail with Delivery Confirmation / Tracking. This Poster is in New condition. RARE , Authentic , Waltz With Bashir Collectible of a unique animated documentary film already considered a classic of World Cinema. Ready for framing or simply hang as is. Great for a Movie Room , Den , Studio or Dorm. Please email with any questions before purchasing if you are unsure about something. We ONLY accept Money Orders , Cashiers Checks or U.S. Cash as payment ( we do NOT accept personal checks or online payment at all ). Please email about local pick-up , we are located in NYC in Times Square. All International Customers MUST email us before purchasing this item.
... [Full Description]

Other Products from daring-niche (View All)