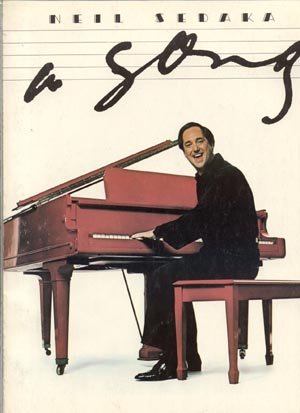 This songbook contains piano, vocals, words/lyrics, & guitar chord diagram arrangements for 11 songs written by Neil Sedaka. Includes PHOTOS of Neil with other celebrities and his Family.

Songs Include:
Alone At Last
Amarillo
Hollywood Lady
Hot And Sultry Nights
I've Never Really Been In Love Before
The Leaving Game
One Night Stand
Sleazy Love
A Song
Tin Pan Alley
You Never Done It Like That

NEIL SEDAKA (born March 13, 1939 in Brooklyn, New York) is an American Brill Building pop singer, songwriter and pianist. He teamed up with Howard Greenfield to write many major hit songs for himself and others.

Sedaka was born to the son of the Turkish Jewish immigrant to Brooklyn and an Ashkenazi Jewish mother. Sedaka began performing with the piano as a youth, and played on a classical music radio station, as well as studying at Juilliard. He also began experimenting with doo wop and rock and roll, playing in an early version of The Tokens. His composition, "Stupid Cupid" was a 1958 success for Connie Francis, and Sedaka signed as a solo performer. A string of hits followed, ending in about 1963.

Sedaka returned to the forefront in 1973, helping ABBA write the song "Ring Ring" for the Eurovision contest. Later in the 1970S, after he experienced a comeback both in recording and songwriting, he began working in England with ELTON JOHN and continued touring for many years after that.

In 1976, Sedaka recorded a new version of "Breaking Up is Hard to Do," a ballad which sounded very different from the original version released in 1962. It made #8 on the pop charts; the original made it to #1. This is an exceedingly uncommon event; the only other instance in the rock era of a performer charting twice with two different versions of the same song is Eric Clapton's LAYLA. The ballad version charted at #1 on the Billboard Adult Contemporary chart.

He was also the writer of the popular song 'Amarillo' a song he wrote for Britain's Tony Christie, it reached the top 40 in the UK (twice 1971 and 2005 - hitting #1 the second time thanks to an amusing video starring Christie, Peter Kay and many other celebrities) and also reached #1 in Spain and Germany in 1971. Sedaka later recorded the song himself, taking it into the US Hot 100 singles chart.

In 1963, Neil Sedaka married his wife, Leba, and they are still together today. They have two children: daughter Dara, a recording artist and vocalist for television and radio commercials, and son Marc, a screenwriter who lives in Los Angeles. In 1980, Sedaka had a Top Ten hit with "Should've Never Let You Go," which he recorded with Dara. Marc and his wife, Samantha, are the parents of twin girls, Amanda and Charlotte, who were born in 2003 and are Neil Sedaka's first grandchildren.

In 2005, Sedaka continues to perform regularly. He now has a star on the Hollywood Walk of Fame and a petition is under way for Sedaka to be inducted into the Rock and Roll Hall of Fame.


Buyer pays $4.85 Shipping in Continental U.S. **Payment must be received within 10 days of the end of the auction, unless other arrangements are made. Checks held till clear. Money Orders & Paypal Payments shipped on receipt. Buyer Must Request Insurance at Additional Expense. IL residents Must add 7.25% sales tax.

Please E-mail me any questions you may have before bidding. If you are looking for another book, just email meThanks! Happy Bidding! Good Luck!

Check out our other GREAT Books and save on shipping!