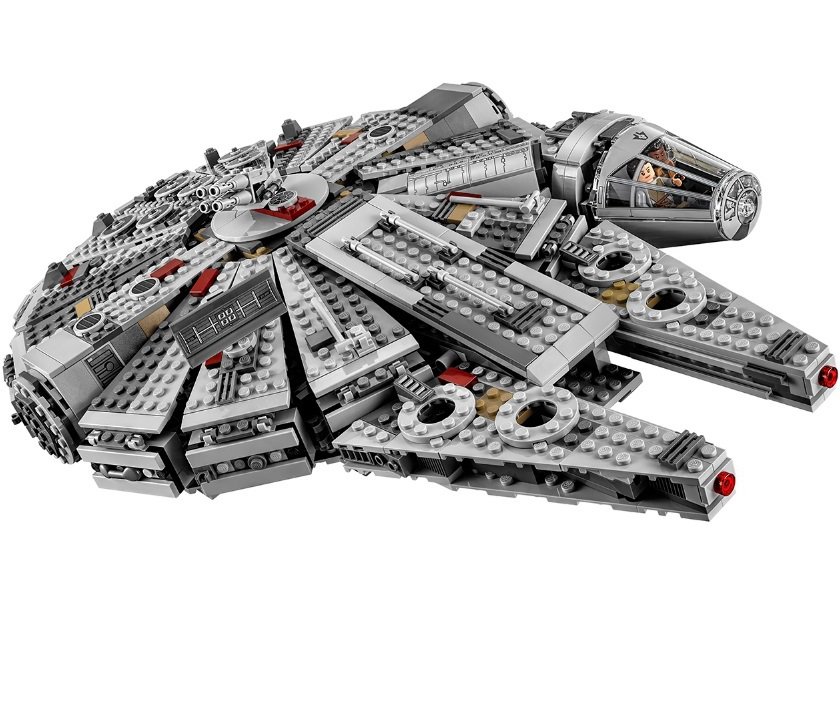 Description:
Bela Star Wars Millennium Falcon - a game set for 1355 parts. It will allow the player to collect the famous model of a cargo spaceship and go with her on amazing space travel.
Millennium Falcon is a spaceship made in light and dark shades of gray with elements of beige and burgundy inserts. It has a round shape with two triangular protrusions in the bow and a cone-shaped control cabin for two passengers, as if attached to it on the right side. In the triangular ledges of the Millennium Falcon, which you can buy on favorable terms in our company, there are spring shooters. Their management is carried out through external round hatches.
To study the interior of the Millennium Falcon Star Wars, you need to remove 12 fragments of the ship's skin and slightly shift its front panel. In the bow, the player will immediately pay attention to the captain’s bridge with many nearby sensors. Nearby is a room with a pair of soft sofas, monitors and a holographic chessboard. At the end of the narrow corridor, a space is allocated for the cabin of Han Solo and Chewbacca, next to which is installed a hyperdrive that needs frequent maintenance.
At the rear of the Star Wars ship, the Millennium Falcon has a cargo bay with a folding ramp. In it, the heroes of the set transport ammunition, work tools, parts for repair work. During the battle with the enemy, the complex navigation system of the spaceship and its laser turrets are activated. Under one of them is a hatch necessary for crew members to be able to quickly get on the ship and take their places.
Additionally:
BELA is a certified manufacturer of designers. The designers of this manufacturer are widely represented.
BELA redeems the rights to manufacture designers of popular series from different manufacturers, as well as release its own exclusive sets and series.
All designers are made in accordance with the standards established by associations of manufacturers of children's toys, have international certificates: ISO9001 quality management system; ICTI certificate (international association of toy manufacturers); Certificates 3C, EN71, 7P, REACH, CHPA.
As a result, the designers are similar and are 100% compatible with each other.
... [Full Description]

Other Products from iqsweetstore (View All)