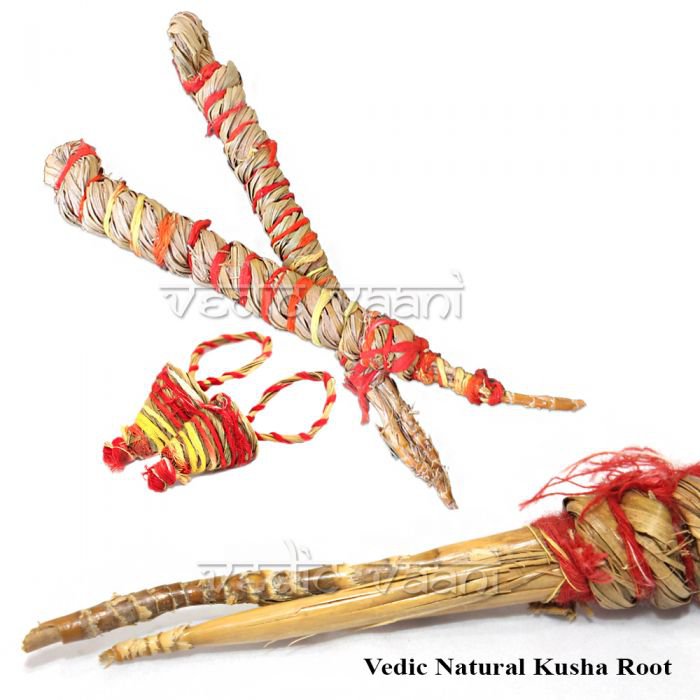 Tweet
The set comprises of:
1.Two ring made of kusha grass is wore on the ring finger of the person performing the ritualistic ceremonies. These rings are known as pavitra (sacred) rings for the puja or Pavitri. The head priest or the the Yajmaan (person for whom puja is done) wears this darbha ring, representing the sacred knot or hair-curl (Skt. shrivatsa) of Vishnu.
2. Set of 2 bundles of sacred Kusha grass with roots for purifying during the puja or ritual ceremonies. Kusha grass is known to be the purifying object.

The sanctity of dharba or kusha,is as old as the Indian gods. Puranas tell how Vishnu assumed the form of the Cosmic Tortoise (Skt.kurma) whose shell served to support Mandara, the mountain that served as a dasher in the churning of the sea of milk. As the mountain rotated,several hairs were rubbed from the tortoise's back. With time, they washed ashore and became Kusha.

Later, when the amrita (nectar) was obtained and distributed among the gods,some drops fell on the grass which further sanctified it imbuing it with healing properties. Therefore,in the tradition hair-cutting of Vaishnava toddlers, the hair is touched with kusha before it is cut. It was used as a ritual seat as far back as the Vedas, and the Bhagavad Gita (ch.6)stipulates that,covered with a skin and a cloth,it is the appropriate seat for meditation. Therefore, it was one of the first offerings made to the Buddha.

For religious purposes, it is not cut or plucked on everyday, but only on Krishna Paksha Padyami (next day after FullMoon day).

Bg 6.11 To practice Dhyan yoga, one should go to a secluded place and should lay Kusha grass on the gorund and then cover it with a deerskin and a soft cloth……

Science says about Darbha:
In recent medical research, Darbha or Kusha grass has been observed to block X-Ray radiation. It is scientifically known as Panic grass and of genus borage species. It can grow up to 2 feet and it appears pointed at the top.

Significance of Darbha:
Kusha grass is meant to have Lord Vishnu’s potency. It is believed that this grass has immense purifying properties. It is worshipped by Vaishnavas on the special day in Bhadrapada month (August – September) called Darbhashtami.

The significance of Darbha grass is also found in Buddhist culture. It is believed that Sakyamuni Buddha sat on a Darbha mat to meditate and got enlightened under the Bodhi tree. The capital city of Malla kingdom of Buddhist is named Kushinagara, just to honor Kusha grass. It was in this city Lord Buddha was cremated.
... [Full Description]