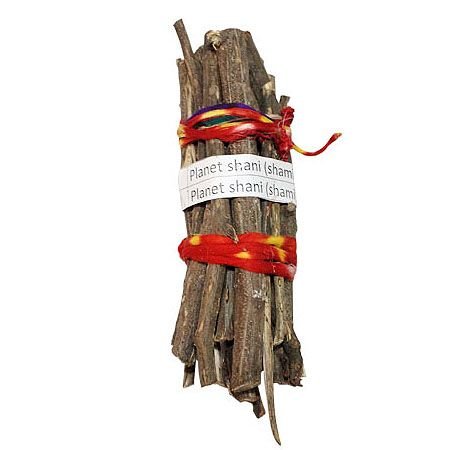 Tweet
The planets are very powerful in nature and we all are under their influence. If these planets are weak or imbalanced they can make life miserable. In order to strengthen weak planets havan is performed. These Shani sticks are offered during fire ceremony (Havan), to pacify the ill effects of Shani or to strengthen the good effect of the planet.

Shani is one of the nine primary celestial beings in Hindu astrology (that is, Vedic astrology). Shani is embodied in the planet Saturn. Shani is the Lord of Saturday. The origin of word Shani comes from the following: Shanaye Kramati Sa i.e. the one who moves slowly. Saturn takes about 30 years to revolve around the Sun, thus it moves slowly compared to other planets, thus the Sanskrit name. Shani is actually a demi-god and is a son of Surya (the Hindu Sun God) and Surya's wife Chhaya. It is said that when he opened his eyes as a baby for the very first time, the Sun went into an eclipse, which clearly denotes the impact of Shani on astrological charts (horoscope).He is depicted dark in colour, clothed in black; holding a sword, arrows and two daggers and variously mounted on a black crow or a raven.

His Tattva or element is air, and his direction is west. He is Tamas in nature and represents learning the hard way, Career and Longevity.
... [Full Description]