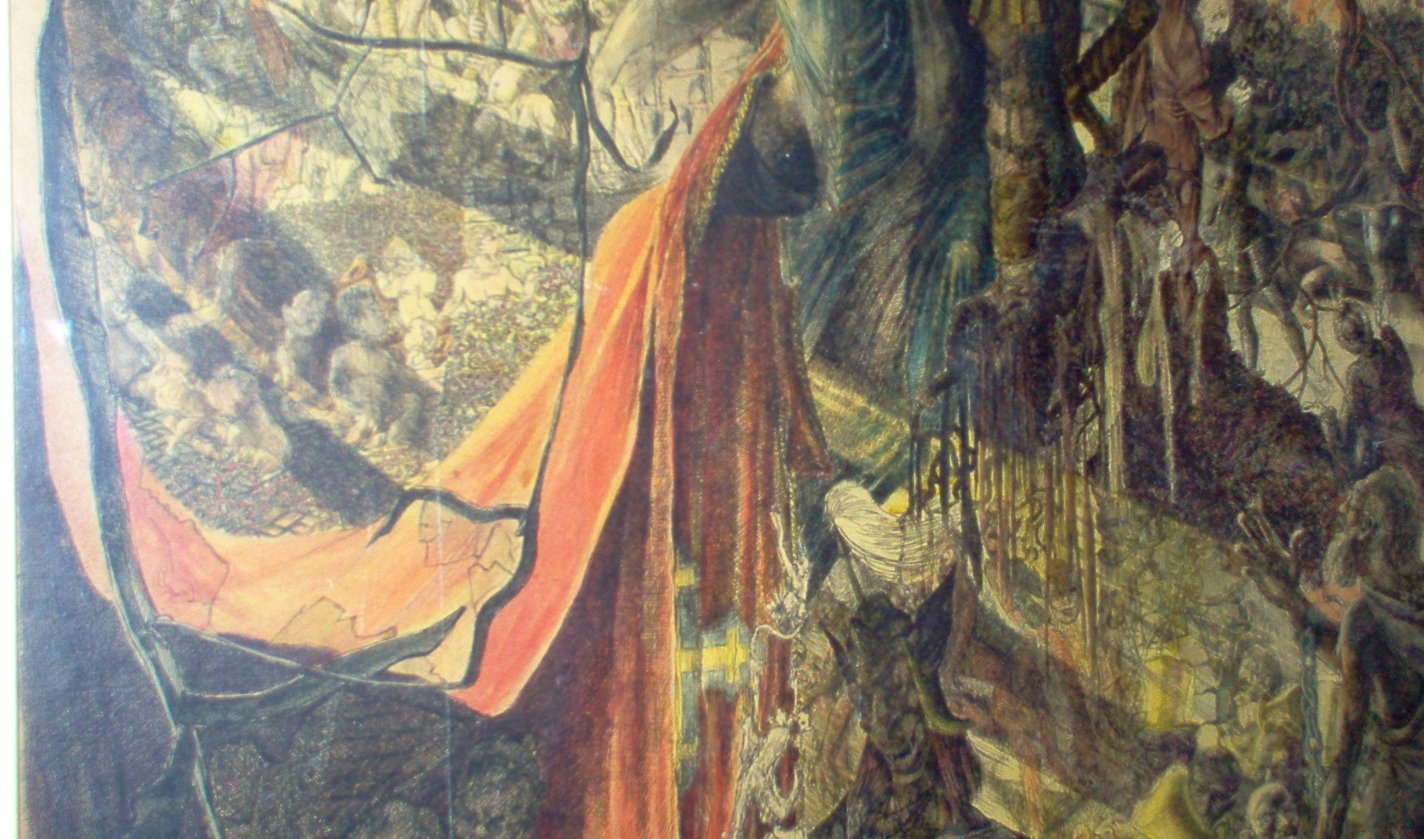 The title of the artwork actually encompasses not only the 'seduction' of the woman by the conqueror - but also the seduction of the mind of man and the immoral workings and trappings of the banks and the elite in utilizing war for their own gain - Remember, at the time of this piece, Ted had just returned from overseas and a stint as a gunner on a Boulton Paul Defiant in the 'Wash' (Northern England near Scotland)

What you are seeing here is a young artist (22 years old at the time) - entering a field that was usually taken up by men in the 40's - 50's and 60's...This explains in 1 piece, the horrors, glories and the underlying evils of war...from the manipulation of the children to the rape and pillaging of the vanquished - to the raising of the banner 'God is on our side'...this marvelous piece of work is never outdated as it puts a perspective on things that are going on all around us today..and probably tomorrow.

This is a view from a child prodigy who was exposed to the horrors of world war II...
This piece is one of the most intense pen, pencil and inks produced by any artist.
The size is 20" x 24"
Framed with glass to protect the pen and ink


Please look at the photos

Only serious inquiries will be looked at
You are privileged to be looking at the artwork from a twentieth century master - who, like Dali, Lautrec, Renoir and Picasso wrote his memoirs within his artwork
ABOUT THE ARTIST:
A.E.Ingram (1921-1986)

-Arthur (Ted) Ingram, a child prodigy, a World War II veteran, an OCA (Ontario College of Art; Toronto, Ontario, Canada) graduate, illustrator, artist, sculptor, visionary, husband and father. Arthur Edward (Ted) Ingram was all of these and more.
-During his 65 years, Ted Ingram exhibited an insatiable appetite for all things creative. His artistic talent was recognized by the local media and area organizations (he won a scholarship at an early age from the IODE) in Saint John, New Brunswick (Canada), where he was born and raised. During his formative years he lived in England with relatives where his talent was nurtured and encouraged.
-Ingram joined the Royal Canadian Air Force where he served as an air gunner (409 Squadron), before being honourably discharged in 1942 after suffering post-war trauma.
-His later works reflected his hatred of war and the resulting aftermath: rape, destruction, inhuman suffering, violence and despair.

-Winning a federal government competition later led him to a fine arts position at the National Museum of Canada in Ottawa where he spent more than 20 years focused on North American Indian and Inuit (known at that time as Eskimo) art.

-In the early sixties Ted Ingram visited Povungnituk in northern Québec with anthropologist Eugene Arima to record the life of the Inuit at that time. He remarked then that the white man was destroying the Inuit way of life and their oneness with Nature.

***Please note that illustrations have had a rather ambitious time weathering the ages, and some show an assortment of different smudges, etc. These drawings/sketches/illustrations/paintings have been squirreled away for many years, and are just now coming out to the public. All of the work is sold as is and will be properly packaged and insured to your gallery or home. Any matting, cleaning and framing is the purchaser's responsibility.

****
Note: The items are on the site are up for 30 days and can be found elsewhere by copying & pasting the title onto your browser and seeing if it is available in another spot.

***Privacy Statement / Disclaimer - We do accept returns under the following stipulations: We have had to do this due to a few people who consistently take advantage of EBay policy. Returns are the responsibility of the purchaser and must be sent back prepaid - There is a 20% restocking charge - please make sure that you know what you are purchasing before you bid/buy. Auctions: We will hold your item for 48 hours for payment-Then it is relisted. Please be aware that all the listings are used, unless listed otherwise, Condition and Description?-All items are described the best we can via the manufacturer. Please note: Feedback: I leave Positive feedback, as soon as Positive is received; please do the same when you receive the item.

PLEASE NOTE: SHOULD YOU WISH TO PAY FEDERAL, PROVINCIAL, STATE, HARMONY OR ANY OTHER TAXES ON THIS PRODUCT, (AS WE ARE NOT PAID TO DO THIS); NOR ARE WE TAX COLLECTORS. THEREFORE, YOU MAY DO SO AT THEIR RESPECTIVE LOCATIONS AT AN OFFICE CLOSE TO YOU