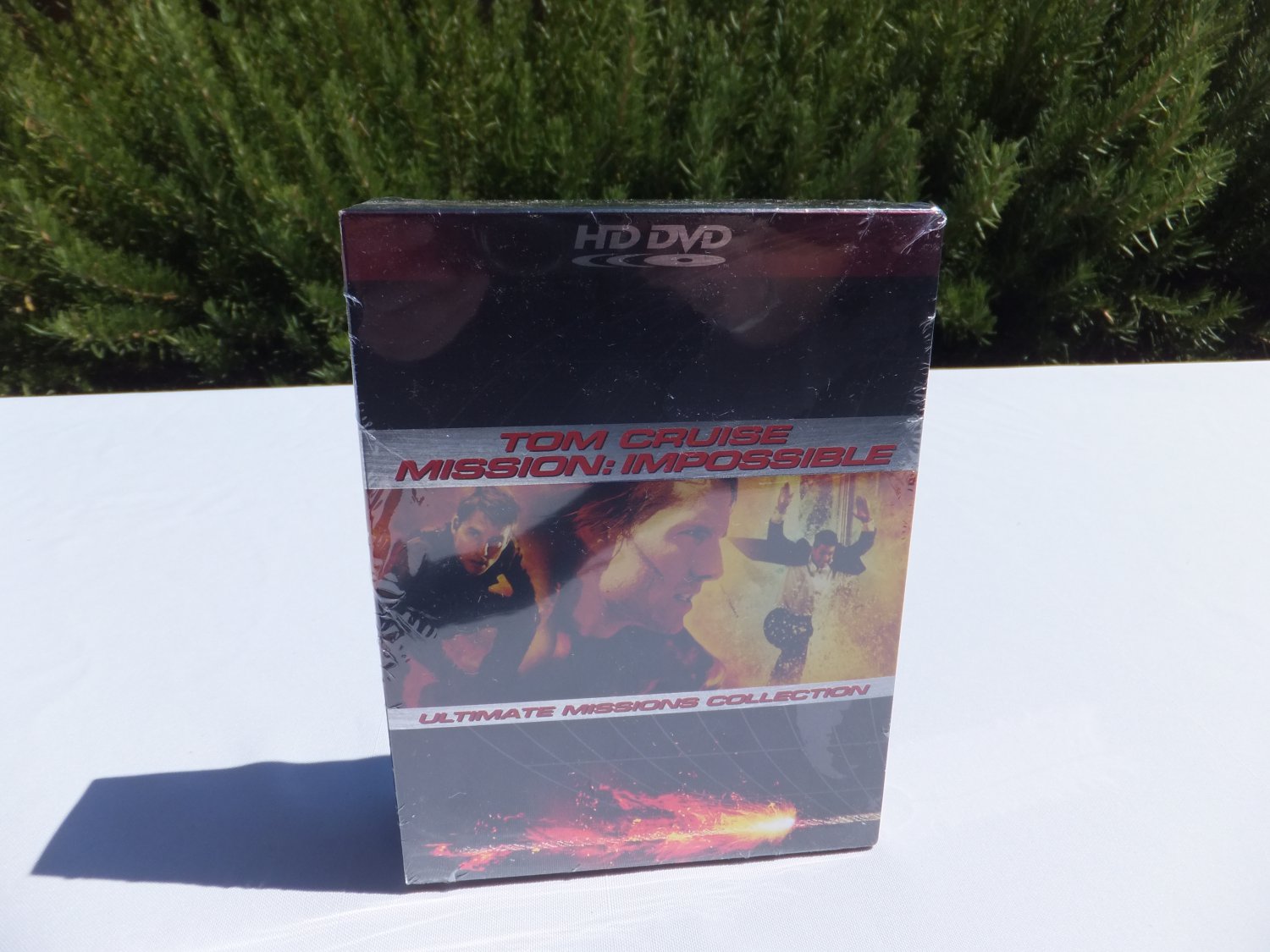 Tweet
Movie set have been opened and will NOT come shrink-wrapped as seen on pictures.

HD DVD are NOT normal DVD nor Blu-ray !! So this movie will need a player that can specifically read HD DVD in order to play correctly.

Movie CD are in GOOD condition with only minimal scratches on them. Comes inside their original jewel cases which are in good general condition, but may have some very light scratches and/or sign of wear on it due to normal use and storage.

DVD set is complete, with manual and/or booklet INCLUDED. THIS IS AN USA NTSC VERSION. DVD have ALWAYS been owned and handled by an adult.

Mission Impossible
A flashy, splashy summer-movie blockbuster that's fun and exciting without being mindless? That's the impossible mission accomplished by director Brian De Palma, star-coproducer Tom Cruise, and the crack team of Mission: Impossible. Based on the '60s TV show and an almost impenetrably complex (but nonetheless thrilling) original story by David Koepp (Jurassic Park) and Steven Zaillian (Schindler's List), with a screenplay by Koepp and Robert Towne (Chinatown, Shampoo), Mission: Impossible begins with veteran agent Jim Phelps (Jon Voight) and his expert crew embarking on a mission that goes horribly, horribly wrong. But nothing is what it seems. The nail-biting set piece--always a signature of director De Palma (Carrie, The Untouchables)--in which Cruise is lowered from the ceiling to retrieve information from a computer in a high-security vault--is an instant classic. But perhaps even more impressive, at least in retrospect, is a flashback sequence in which two characters attempt to reconstruct a series of events from multiple points of view. It's pretty daring and sophisticated stuff for a big-budget spy movie, but brains were always what put the Mission: Impossible team ahead of the competition, anyway, no? --Jim Emerson

Mission Impossible II
Visually stunning, and a likely must for John Woo aficionados, the second Mission: Impossible outing from megastar Tom Cruise suffers from an inconsistent tone and tired plot devices--not only recycled from other films, but repeated throughout the film. Despite remarkable cinematography and awe-inspiring, trademark Woo photography, the movie offers a tepid story from legendary screenwriter-director Robert Towne (Chinatown, Without Limits) and a host of other writers, most uncredited.

It is, regrettably, as forgettable as the first big-budget, big box-office MI in 1996, and it's clear (as Towne confirms) that the plot was developed around Woo- and Cruise-written action sequences. The film combines equal elements of romance and action, and is best when it features the stunning allure of Thandie Newton as Nyah, a master thief recruited by the sinewy charms of Ethan Hunt (a fit Cruise). Deeply in love after a passionate night, the couple must then combat MI nemesis (and Nyah's former lover) Sean Ambrose (Ever After's Dougray Scott). Ambrose holds hostage a virus and its cure, and offers them to the highest bidder.

Woo's famed mythic filmmaking is far from subtle, with heroic Hunt frequently slow-motion walking through fire, smoke, or other similar devices, replete with a white dove among pigeons to signal his presence. The emphasis on romance is an attempt to develop character and a more human side to superspy Hunt, but still the dreary story proves a distraction from the exciting action sequences. John Polson (as an MI team member) is an Aussie talent to keep an eye on. --N.F. Mendoza

Mission Impossible III
At the time of its release, Mission: Impossible III's box office was plagued by the publicity backlash against couch-jumping star Tom Cruise. It's too bad, because this third installment of the spy thriller franchise deserved a better reception than it got. First-time feature director J.J. Abrams (bigwig TV director/producer of Lost, Alias, & Felicity) proves more than able-bodied in creating a Mission: Impossible that's leaner and less over-stylized than John Woo's sequel and less confusing than Brian De Palma's original. Plot is still a throwaway here (Cruise's Ethan Hunt rescues his kidnapped former trainee and works to steal a device that... well, we don't really know what it does, but it's something about mass destruction that costs $850 million), but the action sequences, particularly one where Ethan faces down a helicopter on a bridge and gets flung hard against the side of a car, are particularly impressive since Cruise, at 44, is still doing most of his own stunts and shows no hint of the weathered look that's struck his action-star peers. (Though no Mission: Impossible stunt will ever be quite as simultaneously nail-biting and funny as the first film's wire-dangling break-in of CIA headquarters.)

Mission: Impossible III boasts a pedigreed cast, particularly Oscar┬« winner Philip Seymour Hoffman (Capote) as baddie arms dealer Owen Davian. Hoffman plays Owen all teeth-clenched and cool, especially when threatening to kill Ethan in front of his lovely new wife (Michelle Monaghan) who has no idea of his spy life. But in his first action-film lead role, Hoffman's almost too calm and collected to really make a memorable villain, especially when the rest of the cast--Ving Rhames (the only other cast member to return for all three films), Asian film star Maggie Q, and an underused Jonathan Rhys-Meyers--are a highlight as Ethan's IMF team. Mission: Impossible is still fun popcorn spy fare, and if Cruise chooses to end the franchise here, at least he goes out on a high note. --Ellen A. Kim

Other Products from drakkor (View All)