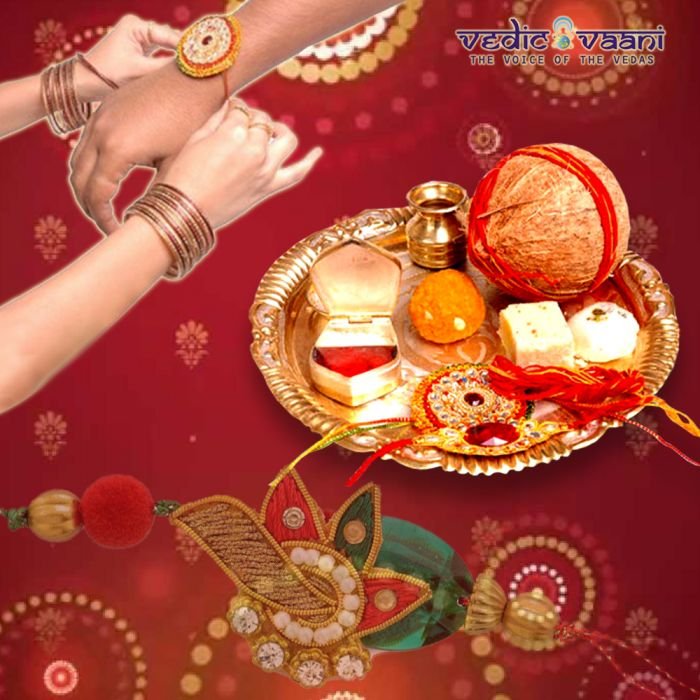 Tweet
A special energisedRaksha Sutra thread would be energised and sent. This thread needs to be tied on your brothers hand to give one full year protection.
Raksha Bandhan in Sanskrit literally means "the tie or knot of protection". It is an ancient festival that ritually celebrates the love and duty between brothers and their sisters.Goddess MahaLakshmi tied a rakhi onto the wrist of the King Bali from hell thus making him Her brother and liberated Lord Narayan. On this day frequencies of Lord Ganesh and Goddess Saraswati reach the earth in greater quantities and both the siblings benefit from the custom to a greater extent. The Bhavishya Puran states that Raksha Bandhan was basically meant for kings. A new custom of tying rakhis began from the historical ages. The sister is supposed to tie the rakhi to the brother's wrist. The feeling behind this is that the brother should become prosperous and he should protect the sister.

Once the Rakhi has been tied, the sister says a prayer for the well being - good health, prosperity and happiness - for her brother. This ritual sometimes involves an aarti, where a tray with lighted lamp or candle is ritually rotated around the brother's face, along with the prayer and well wishes. The prayer is a self composed note, or one of many published Rakhi poems and prose. One of the earliest examples of a Rakhi prayer is found in Book V, Chapter V of Vishnu Purana; it is the prayer that Yasoda says while tying a Raksha Bandhan amulet on Krishna's wrist. An abridged form of the prayer is:

May the lord of all beings protect you,
May the one who creates, preserves and dissolves life protect thee,
May Govinda guard thy head; Kesava, thy neck; Vishnu, thy belly;
the eternal Narayana, thy face, thine arms, thy mind, and faculties of sense;
May all negativity and fears, spirits malignant and unfriendly, flee thee;
May Rishikesa keep you safe in the sky; and Mahidhara, upon earth.

After the prayer, the sister applies a tilak, a colorful mark on the forehead of the brother. After the tilak, the brother pledges to protect her and take care of his sister under all circumstances. The sister then feeds the brother, with her hands, one or more bites of sweets (desserts), dry fruits and other seasonal delicacies.

A special energised Raksha Sutra thread would be energised and sent. This thread needs to be tied on your brothers hand to give one full year protection.