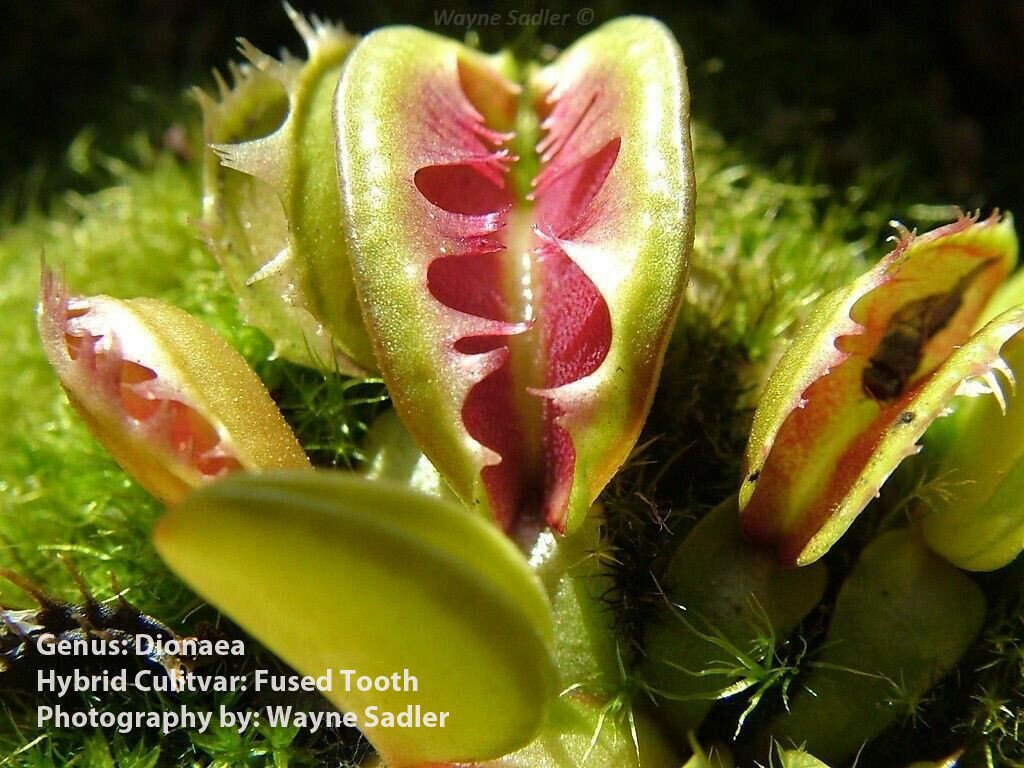 Tweet
Cultivars Description:
The Dionaea 'Fused Tooth' is one of the many cultivars that are sort after, due to the distinctive characteristics of the marginal lashes which are fused together along the leaf lobe. The traps are functional on this cultivar however due to fact that the marginal lashes do not interlock in the way one would expect from a wild Dionaea, they are very seldom are unable to retain the prey they have captured. The distinctive fused marginal lashes do vary in there numbers across the leaf lobe, to which these can be at 90 degree angels pointing in towards the other trap.

The traps can reach a size of 40mm, and the leaf bases tend to be no longer than 80mm. The interior surface of the trap’s go a deep red to purple colouration depending on the amount of direct sunlight they are exposed to. The leaves & other foliage tend to have the typical yellowish green colouration, though most of the foliage tends to be more decumbent, there can be a few upright leave’s that may be produced in early spring.

The Venus Fly Trap:
The Venus Fly Trap is a fascinating plant for all ages and genders, the traps have a sweet nectar for attracting flies and other arthropods, when the insect touches the trigger hairs inside the lobe the trap is sprung and the traps close at a lighting speed. The Dionaea tolerates our climate in the UK with ease, making it ideal in any home, conservatory, window sill, green house, class room even a potting shed with windows any of those environments so as to capture those unwanted pests. Once the insect is caught, the trap will seal, to which the trap will then start to secrete an enzyme that dissolves the insect, it is at this point the plant digests it's victim. Once the plant has completed the digestion cycle the trap will re-open, await its next meal. It should be noted that it's a myth that these plants require feeding since they are able to produce enough sugars during the photosynthesis process, plants use the energy of the sun to drive a reaction that converts carbon dioxide and water to sugar which in turn produces oxygen.

Once you have seen one in action I am sure you want one, which why this makes a great fascination amongst young children and will make a great gift for a birthday or Christmas gift, which once you can keep one, you are fully fledged to be able to keep on of the other different variations (cultivars) within the same genus of Dionaea Muscipula, there are over 200 cultivars within the genus approximately to collect at present.


Note :
Item color displayed in photos may be showing slightly different on your computer monitor since monitors are not calibrated same
... [Full Description]