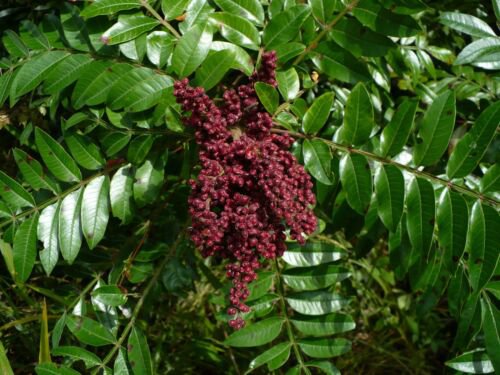 Tweet
Rhus copallinum, commonly called dwarf sumac, flameleaf sumac, winged sumac and shining sumac, is a multi-stemmed, deciduous shrub that is native to eastern North America from New York to Alabama and Florida. It is a deciduous shrub or small tree which occurs in dryish soils on hillsides, open woods, glades, fields and along the margins of roadsides, railroad tracks and roads throughout most of the central and southern parts of the State. It is a large open shrub which typically grows to 10' tall (rarely to 30' as a tree) and spreads by root suckers to form large colonies in the wild. It is very similar to smooth sumac (Rhus glabra), except (a) leaflets are untoothed and (b) leaf midribs have leafy ridges or wings that give rise to another common name of winged sumac for this plant. Large, compound, odd-pinnate leaves (each with 9-21 untoothed, oblong-lanceolate, shiny dark green leaflets). Leaves turn flame red in autumn. Tiny, greenish-yellow flowers bloom in terminal pyramidal panicles in late spring to early summer, with separate male and female flowers usually occurring on separate plants (dioecious). Pollinated female flowers produce showy fruiting clusters (to 8" long). Each cluster contains numerous hairy, berry-like drupes which ripen in autumn, gradually turning maroon-brown as they persist through much of the winter. Fruit is attractive to wildlife.

1. Scarify the seeds by nicking or sanding the seed coat.
2. Soak the seeds in water for several hours.
3. Put a mixture of potting soil and sand or perlite into a pot with drainage holes in the base. The soil should be moist and well-drained.
4. Sow the seeds on the soil.
5. Cover the seeds with a thin layer of soil.
6. Water the seeds. Keep the soil moist but not wet.
7. When the plants are a few inches tall, they can be transplanted.

Many take several weeks, months, and some even up towards a year depending on dormancy, region, season etc. It is important that the buyer understands that seeds are perishable products and seed germination can be adversely affected by such factors as mold/fungus, bugs, temperature, moisture content, light intensity, dormancy, care, contamination of planting media among many other reasons

Please stored in a cool, dry place
The loss caused by the climate conditions or improper cultivation techniques, seed prices outside the economic responsibility
Item color displayed in photos may be showing slightly different on your computer monitor since monitors are not calibrated same
... [Full Description]