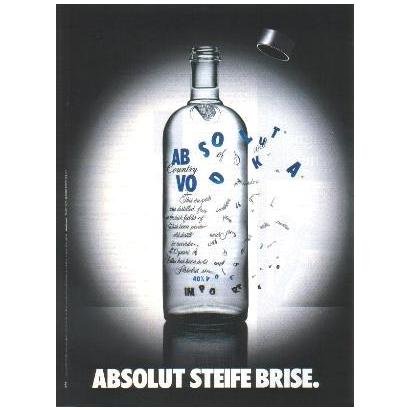 Tweet
ABSOLUT STEIFE BRISE was one of the first signs that Absolut’s world-famous 25 year campaign was getting a bit lazy and coming to an end. In 2005 Absolut published several different traditional ads in German magazines but with German language captions. This image was originally published in the United States during the early 1990’s with the tagline ABSOLUT CHICAGO. The ad measures approximately 8 3/8” x 10 7/8” on light bond glossy paper. The page has been carefully extracted from a new and unread magazine and is in excellent condition. There are no wrinkles, crinkles, tears or uneven edges. Ad only – magazine is not included.

COMBINE YOUR PURCHASES AND SAVE ON SHIPPING!
... [Full Description]

Other Products from adfactory (View All)