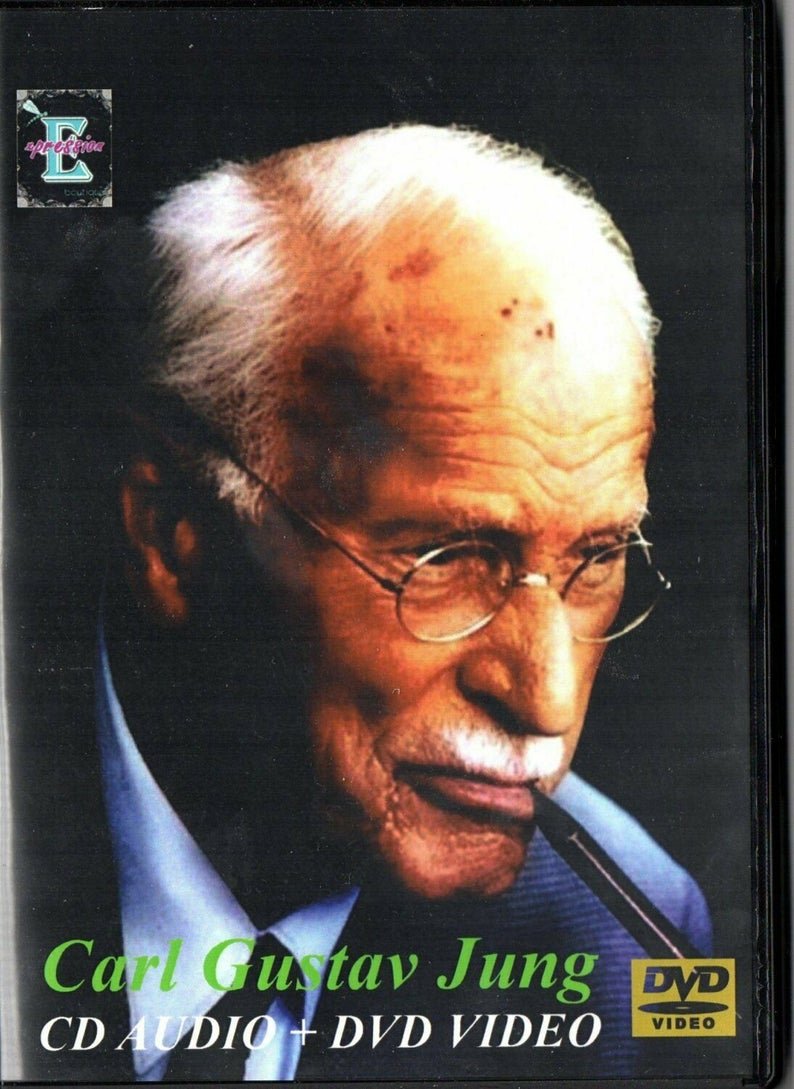 Tweet
Carl Gustav Jung
1875 - 1961
As against Freud's view that the dream is essentially a wish-fulfillment, I hold that the dream is a spontaneous self-portrayal, in symbolic form, of the actual situation in the unconscious. - (C.G. Jung )

All in English Language

Disc 2 ( 4 films that take an up close and personal look into the life and work of Carl Gustav Jung):

4 Videos on DVD Note: this DVD plays on any PAL & NTSC.


1. Matter Of Heart 1985 (1h47min)
Utilizing rare home movies, archival footage, and interviews, Matter Of Heart presents a film portrait of psychoanalyst and Freud contemporary C.G. Jung, whose groundbreaking theories on personality, archetypes, synchronicity, and the collective unconscious unified the fields of psychiatry and spirituality.
2. Jung on Film (interview.1957) (1h16min)
In this candid 1957 interview, conducted just four years prior to his death, famed thinker and founder of analytical psychology Carl Jung discusses his remarkable life and career -- from early work with Sigmund Freud and Jung's break with psychoanalysis to his groundbreaking explorations of the dream world. Guided by insightful interviewer Dr. Richard I. Evans, this conversation is at once an intimate self-portrait from a true genius and a unique commentary on the scope and meaning of his life's work. The 1990 re-release of these historic tapes serves as a research tool for those
familiar with Jung's writings or as a concise, accessible introduction to his truly original mixture of self-analysis, clinical observations, theory, history, and myth.(New York Times)
3. The Wisdom of the Dream (2h34min)
Traces psychologist Carl Gustav Jung's life and career, from his childhood roots to the enduring influence his ideas have on modern life.
Part1: A Life Of Dreams ,"Viewers follow Jung's life from his childhood, through his years as a hospital psychiatrist, to the initial influence of Freud, to their disagreement and split. Former pupils reveal Jung's impact on their lives."
Part2: The Inheritence Of Dreams , Jung's conception of archetypes—the stories and symbols that are shared by different cultures and that make up the collective unconscious. Analyst John Beebe identifies archetypes in science-fiction films such as Star Wars. Rare footage traces Jung's travels to Africa, Britain, and New Mexico."
Part3: A World Of Dreams , Interviews with advocates of Jung's theories reveal his enduring influence on modern life. Analyst John Beebe considers a key scene in Hitchcock's Notorious in Jungian terms. Dr. Harry Wilmer explains his remarkable research into the "healing nightmares" of Vietnam veterans."
4. C. Jung - Face to Face (1959)(40 mins)
An informal video interview with Carl Gustav Jung in Switzerland at Jung's lakeside home near Zurich, about his upbringing, his relationship
with Freud, and aspects of his psychological theories. When Carl Jung consented to be interviewed, the medical community was surprised that this very private figure was suddenly willing to allow an interviewer into his personal space. Provides us a very rare glimpse into the Swiss psychiatrist's personal viewpoints and sheds insight into a little his pioneering work.

" The artist is not a person endowed with free will who seeks his own ends, but one who allows art to realize its purposes through him. As a human being he may have moods and a will and personal aims, but as an artist he is "man" in a higher sense - he is "collective man," a vehicle and moulder of the unconscious psychic life of mankind." (from 'Psychology and Literature', 1930
... [Full Description]

Other Products from dvdslondonuk (View All)