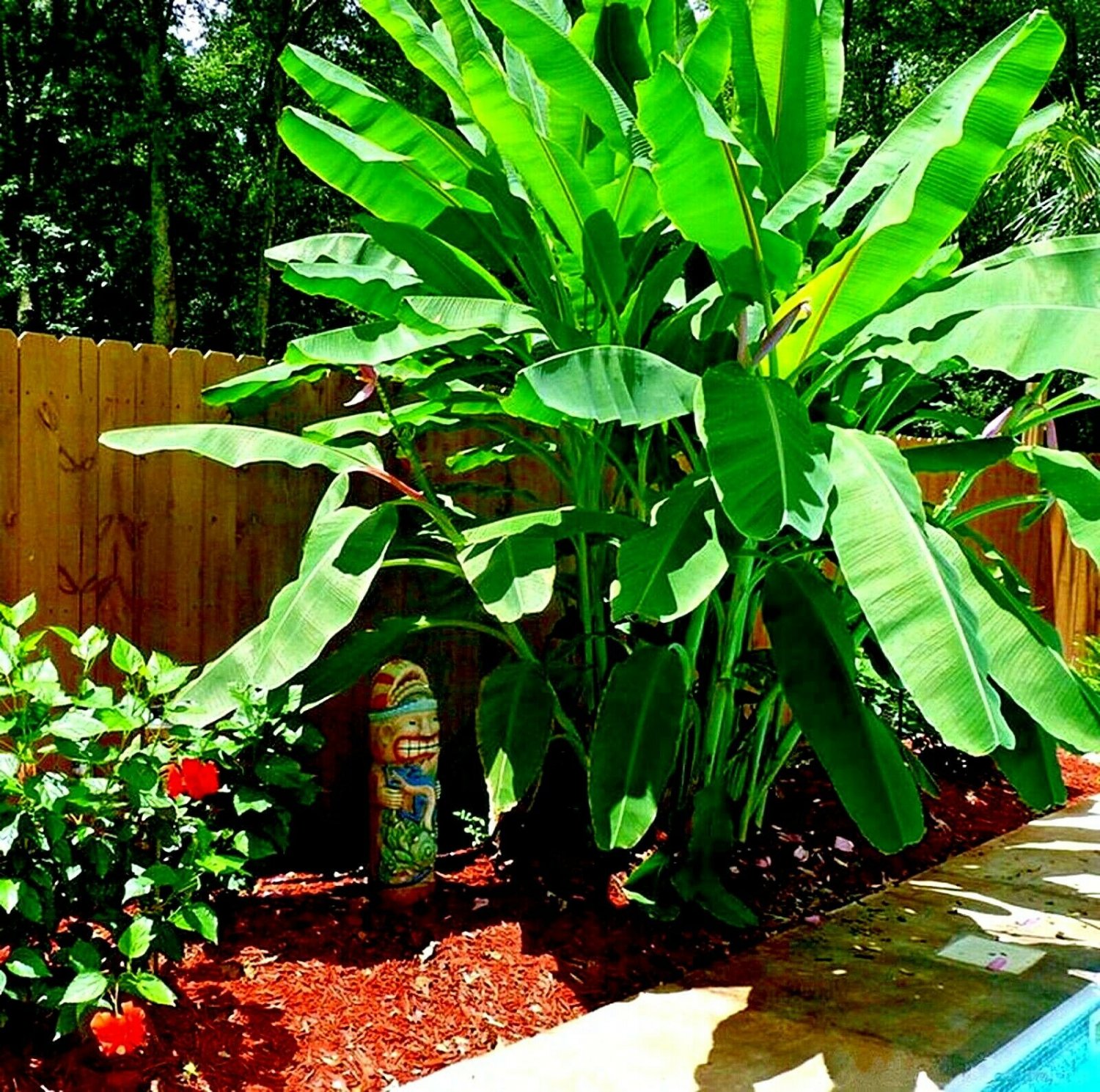 Sow indoors at any time of year.

Sow seeds as soon as you are able. If you are not going to sow them, store them in their packaging in a cool, dark, dry place. (Do not refrigerate)
1) Pour distilled boiling water over seeds and allow them to soak for 3 - 4 days in the warm water. Let the seeds cool with the water. Change the water & Repeat this process each day. This process is Very important, as gets rid of germination inhibitors by softening the rock hard shells of the Musa seeds.
2) Fill either large cells or trays with perlite, vermiculite & sterilized compost. Stand the trays in water until the medium is completely moist.
3) Sow the seeds an inch deep. Spray the seeds with a little copper based fungicide.
4) Use a heated propagator under the trays. Bottom heat is needed for optimal results with any Musa seed, so use a propagator if you have one or in a warm location out of direct sunlight for best results. Do not exclude light as this helps germination. Keep at a constant temperature of 68 to 77°F. Keep at 77+ during the day, while letting the temperature drop to 68-70 at night as this will daily change in temperature will increase germination rates and speed.

5) Check the seeds daily for germination. If mold or fungus starts to appear, remove the seeds and wash them in warm water. Spray them with fungicide and re-sow in a fresh medium in a sterilized pot. Keep the surface of the compost moist but not waterlogged. As with any Tropical or Exotic seed, patience is needed as germination is always erratic. Some may sprout within 2 to 3 Weeks, while most others can take from a few all the way up to Twelve Months. Do not give up too soon! They are Worth the Wait!

Growing:
When large enough to handle, transplant seedlings into 7cm (3in) pots, taking care not to damage the root system. Grow on in well-lit conditions, and pot on, into rich, well drained soil, as required. Water the plant thoroughly and every 1 to 3 days thereafter depending on the season. Do not soak - remember moist soil, not wet, not dry.

Position:
Musa do not like wind, or rather you will not like the way they look as the leaves spit in windy locations. The planting site should be chosen for protection from wind and cold weather, if possible, the south or southeast side of the house.
Cold hardy bananas appreciate sun, water and a rich soil to grow well. It does not matter if the plants are planted in a position that is in shade during winter as the plants will be covered up.
The plants will grow in a wide variety of soils, but to thrive, they should be planted in a rich, well-drained soil that is not compacted to avoid waterlogging over the winter. Before planting, test your soil’s ability to drain properly. Dig a post-hole about 60cm (2ft) deep. Fill it with water. If it empties within two hours, the drainage should be ideal.
Once you have chosen a location for your banana plant, you need to prepare the soil well. Make sure the hole is is at least 60cm (2ft) deep, dig plenty of home made compost and composted manure into an area considerably bigger than your new plant's pot. Pop the plant it the soil and water well.

Cultivation:
Their rapid growth rate makes bananas plants heavy feeders. During warm weather, apply a balanced fertilizer once a month.
Spread the fertilizer evenly around the plant in a circle extending 120cm (4ft) from the trunk. Feed container banana plants on the same monthly schedule using about half the rate for outside plants.

Overwintering:
Container grown plants can be moved indoors or to a sheltered spot in the garden. Outdoor plants need protection, either wrap the trunk or cover with blanket if the banana plants are small and low temperatures are predicted. You can also dig up the roots, and store in a dark dry place inside until spring. The foliage can be cut back to 15 to 20cm (6 to 8in). Leaves are damaged at 0°C (32°F) but the plant will grow back from the root at the beginning of spring. Northern Climates need to cover the roughly 18 inches left that has been cut down with a thick layer of mulch during the winter months so they will remerge in Spring.

Origin:
Musa acuminata is native to the biogeographical region of Malaysia and most of mainland Indochina.
Early farmers introduced M. acuminata into the native range of M. balbisiana resulting in hybridisation and the development of modern edible clones. Westward spread included Africa which already had evidence of Musa acuminata × Musa balbisiana hybrid cultivation from as early as 1000 to 400 BC. They were probably introduced first to Madagascar from Indonesia. From West Africa, they were introduced to the Canary islands by the Portuguese in the 16th century, and from there were introduced to Hispaniola (modern Haiti and the Dominican Republic) in 1516.
Musa acuminata is better known for being implicated in the origin of the vast majority of edible bananas. Four subspecies (banksii, zebrina, malaccensis and burmannica) have been shown to be involved in the domestication of the banana
The banana plant is the largest herbaceous flowering plant. It is botanically classed a herb, not a tree due to the lack stringy tissue (wood) in the stem. The banana itself is considered a fruit because it contains small seeds.
All the above-ground parts of a banana plant grow from a structure usually called a 'corm'. Plants are normally tall and fairly sturdy, and are often mistaken for trees, but what appears to be a trunk is actually a 'false stem' or pseudostem.
Musa is in the family Musaceae. Some 70 species of Musa were recognised by the World Checklist of Selected Plant Families as of January 2013. Several produce edible fruit, while others are cultivated as ornamentals.

Nomenclature:
The genus Musa was created by Carl Linnaeus (1707-1778). Linnaeus had yet to establish two-word names for organisms so was content with the one-word name Musa for the banana. However, it was the custom, soon to be a rule (of Linnaeus, who loved rules), that names (of genera at least) must derive from Latin or Greek, or be eponyms for naturalists. Linnaeus was well aware that musa came from the Arabic moaz or mauz. for banana and was therefore 'barbaric' (i.e. non-classical). But he liked the name and it did have some 'official' precedence in the works of Cesalpino and others. Cleverly he circumvented this troublesome etymology by 'naming' the banana after Antonius Musa, a botanist and physician to the great Emperor Augustus, thus coining an eponym that was also decidedly Latin.

The species name acuminata means 'tapering into a long narrow point' is a reference to the acuminate leaf of this species. The word derives from the classical Latin acuminare, meaning to sharpen.
The word acus, meaning a needle-like structure. Acute, meaning extremely sharp or severe or intense, is used to describe many things such as acute pain, or an acute triangle.
Pronounced a·cu·mi·na·tum. It is commonly called the Chinese Banana and Ladyfinger Banana
The name banana is thought to be of West African origin, from the Wolof word banan meaning 'finger', and passed into English via Spanish or Portuguese. The bananas that were growing in Africa as well as Southeast Asia were not the eight-to-twelve-inch giants that have become familiar in the supermarkets today. They were small, about as long as a man's finger, and have seeds inside.
... [Full Description]

Other Products from newglory (View All)