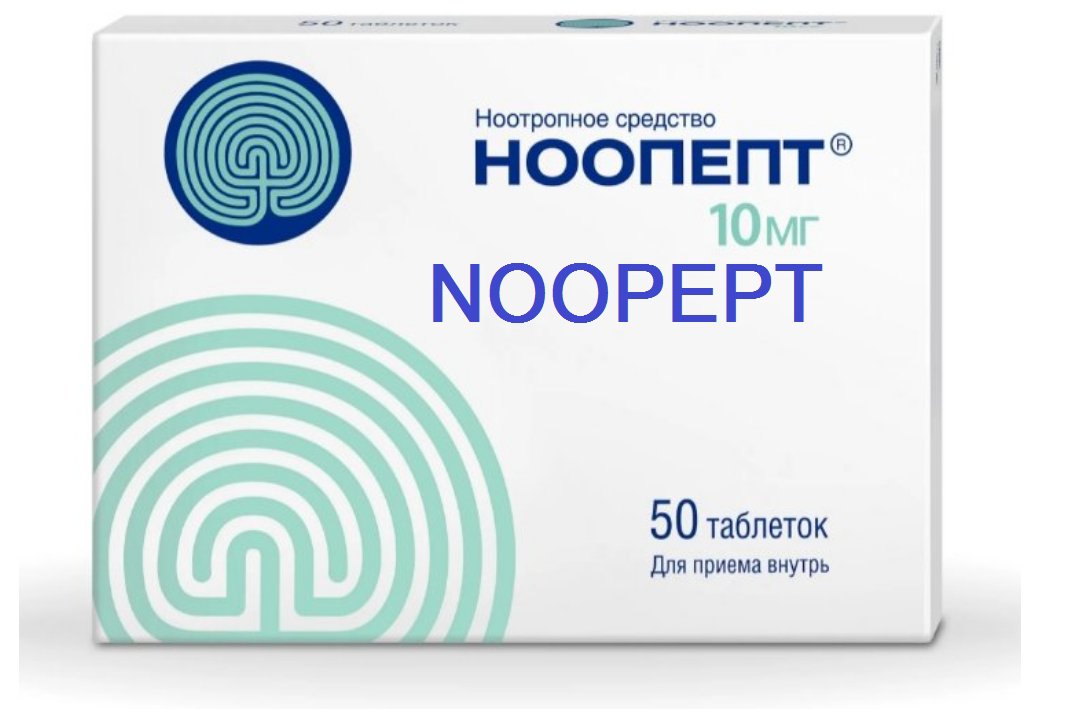 DESCRIPTION
Tablets are white, round, flat-cylindrical with a bevel.

Noopept® has nootropic and neuroprotective properties. Improves learning ability and memory by acting on all phases of processing: initial information processing, consolidation, retrieval. Prevents the development of amnesia caused by electroshock, blockade of central cholinergic structures, glutamatergic receptor systems, deprivation of the paradoxical phase of sleep. The neuroprotective (protective) effect of Noopept® is manifested in an increase in the resistance of the brain tissue to damaging influences (trauma, hypoxia, electroconvulsive, toxic) and in weakening the degree of damage to brain neurons. The drug reduces the volume of the focus in the thrombotic model of stroke and prevents the death of neurons in the tissue culture of the cerebral cortex and cerebellum exposed to neurotoxic concentrations of glutamate and free radical oxygen. Noopept® has an antioxidant effect, blocks voltage-dependent calcium channels of neurons, weakening the neurotoxic effect of excess calcium, improves the rheological properties of blood, having antiplatelet, fibrinolytic, anticoagulant properties.

The nootropic effect of the drug is associated with the formation of cycloprolylglycine, which is similar in structure to an endogenous cyclic dipeptide with antiamnestic activity, as well as with the presence of a cholinopositive action.

Noopept® increases the amplitude of the transcallosal response, facilitating associative connections between the cerebral hemispheres at the level of cortical structures. Promotes the restoration of memory and other cognitive functions, impaired as a result of damaging influences - brain trauma, local and global ischemia, prenatal damage (alcohol, hypoxia).

The therapeutic effect of the drug in patients with organic disorders of the central nervous system is manifested starting from 5-7 days of treatment. First, the anxiolytic and mild stimulating effects available in the spectrum of Noopept® activity are realized, manifested in the reduction or disappearance of anxiety, increased irritability, affective lability, and sleep disturbances. After 14-20 days of therapy, a positive effect of the drug on cognitive functions, attention and memory parameters is revealed.

Noopept® has a vegetative-normalizing effect, helps to reduce headaches, orthostatic disorders, and tachycardia.

When the drug is discontinued, there is no “withdrawal” syndrome.

Does not have a damaging effect on internal organs; does not lead to a change in the cellular composition of blood and biochemical parameters of blood and urine; does not possess immunotoxic, teratogenic effects, does not exhibit mutagenic properties.

Omberacetam, absorbed in the gastrointestinal tract, enters the systemic circulation unchanged, penetrates the blood-brain barrier, and is determined in the brain in higher concentrations than in the blood. The time to reach the maximum concentration is on average 15 minutes. The half-life from blood plasma is 0.38 hours. It is partially preserved unchanged, partially metabolized to form phenylacetic acid, phenylacetylproline and cycloprolylglycine. It has a high relative bioavailability (99.7%), does not accumulate in the body, does not cause drug dependence.

INDICATIONS FOR USE
Impaired memory, attention, other cognitive functions and emotionally labile disorders (including in elderly patients) with:

APPLICATION DURING PREGNANCY AND DURING BREASTFEEDING
The drug is contraindicated for use during pregnancy.

DOSAGE AND APPLICATION
Noopept® is applied orally, after meals. Treatment begins with a dose of 20 mg, divided into two doses of 10 mg during the day (morning and afternoon). In case of insufficient effectiveness of therapy and with good tolerability of the drug, the dose is increased to 30 mg (see "Special instructions"), distributing it into three doses of 10 mg during the day. Do not take the drug later than 18 hours. The duration of the course of treatment is 1.5 - 3 months. A repeated course of treatment, if necessary, can be carried out after 1 month.

SIDE EFFECT
Allergic reactions are possible. In patients with arterial hypertension, mainly of severe degree, while taking the drug, an increase in blood pressure may be observed.

OVERDOSE
Specific manifestations of an overdose have not been established.

INTERACTION WITH OTHER DRUGS
The interaction of Noopept® with alcohol, hypnotics and antihypertensive drugs and psychostimulating drugs has not been established.

SPECIAL INSTRUCTIONS
If it is necessary to increase the dose of the drug (up to 30 mg / day), with prolonged use, as well as with simultaneous use with other drugs, the appearance of adverse reactions or worsening of the condition, you should consult a doctor.

INFLUENCE ON ABILITY TO DRIVE VEHICLES, MECHANISMS
Noopept® does not affect the ability to drive mechanisms and vehicles.

On 25 tablets in a blister strip of PVC film and aluminum foil.

2 blister packs together with instructions for use are placed in a cardboard box.

STORAGE CONDITIONS
At a temperature not higher than 25 ° C.

Keep out of the reach of children.

Do not use after the expiration date printed on the package.

Other Products from autodoctorrussia (View All)